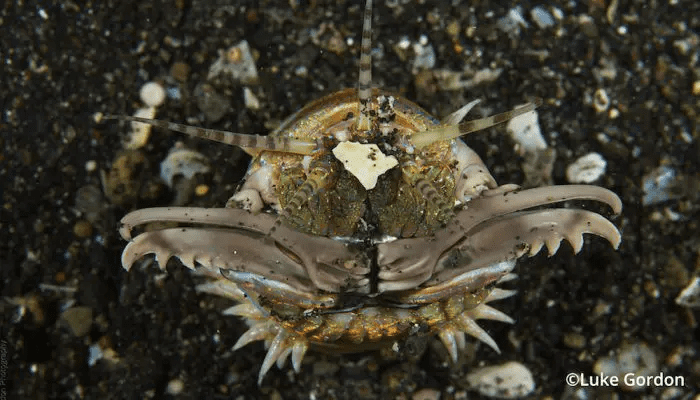 It’s All About The Bobbit Worm

There’s no denying that the Bobbit worm (Eunice aphroditois) is definitely not one of the most attractive critters found in Lembeh, however, it’s certainly one of the strangest! This alien-looking creature is also referred to as a ‘sand-striker’ due to its hunting habits. In this Blog we explain more about the Bobbit worm, its habits, and where to find it in Lembeh.

What is a Bobbit Worm?

Technically speaking, the Bobbit worm is from the order Eunicida of polychaete worms which were first discovered in Norway in the 1700’s. All species in this order have antennae and segmented bodies (parapodia) which can include up to 1500 segments!

Bobbit worms can measure anything from 10cm up to 3m but because they live in the sand and hunt nocturnally, it is unusual to see the entire creature. Their body is covered in bristles and ranges from black or brown through to a purple hue and has an iridescent shimmer to it. They have 5 antennae instead of eyes which they use while hunting.

Where Does the Name Come From?

The common name “Bobbit Worm” comes from a gruesome case that occurred in the United States during 1993. John and Lorena Bobbitt were a married couple who received international press coverage when Lorena Bobbitt sliced off her husband’s manhood while he was sleeping. Needless to say, their marriage ended in divorce! 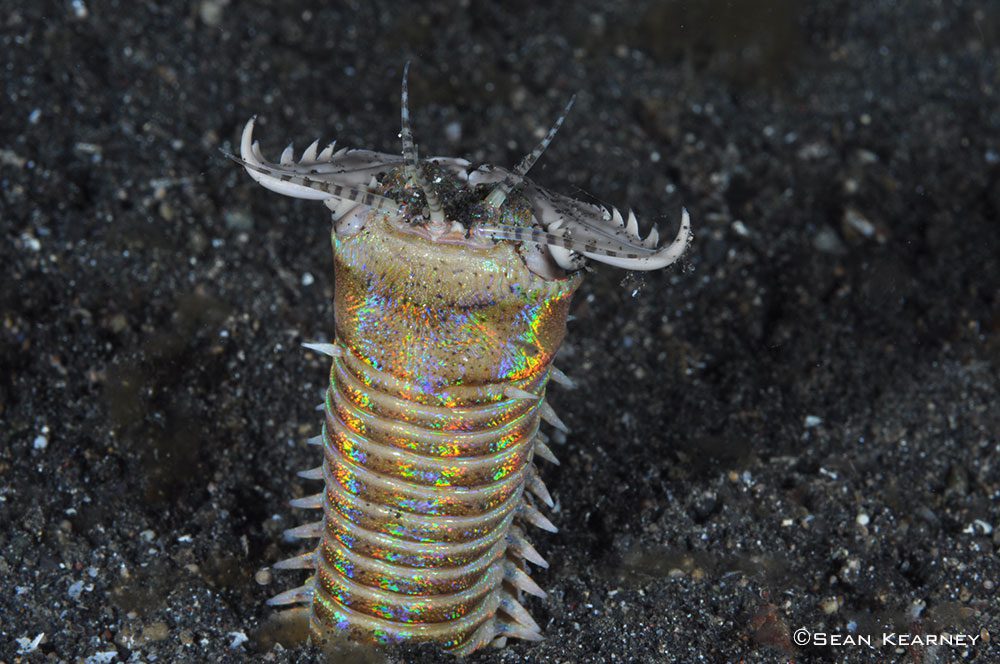 It is most common to see Bobbit worms at night when they are most active. Our dive guides are experts at spotting Bobbit worms’ antennae which are usually the only visible part of the creature. Bobbit worms live in the fine black sand and sediment of Lembeh’s dive sites with only their antennae protruding to detect the presence of potential prey. When the Bobbit worm senses prey nearby, it will strike with lightning fast speed. The jaws of the Bobbit worm are ordinarily retracted inside the body but when striking, the jaws are extended out and have such strength that they are capable of snapping prey in half. They feed on fish which after striking, they drag down into their burrow to be devoured.

Bobbit worms are not known to be aggressive or for striking divers, however, if handled by humans, their bristles will deliver a nasty sting which can result in permanent nerve damage.

When trying to capture images of Bobbit worms, patience is essential. When a Bobbit worm detects divers nearby, they will retract down into their burrow. It’s important to maintain neutral buoyancy while remaining low down and close to the bottom – and then the waiting game begins!

The Bobbit worm will come back to the top of the burrow if the divers remain still. Trying to capture an image of a Bobbit worm striking is especially challenging due to the speed with which they move. Keeping an eye out for any small fish swimming nearby may give you advance notice of when the Bobbit worm may strike. Remember that if you are not confident shooting fast-moving marine life then switching to video and filming is always an option if you have lights that will support videography.

On occasions the Bobbit worm will raise itself up out the burrow so that the head and some of the body segments are visible – this is a great shot especially when the iridescent sheen is captured, however, it can require waiting and remaining stationary for an extended period. 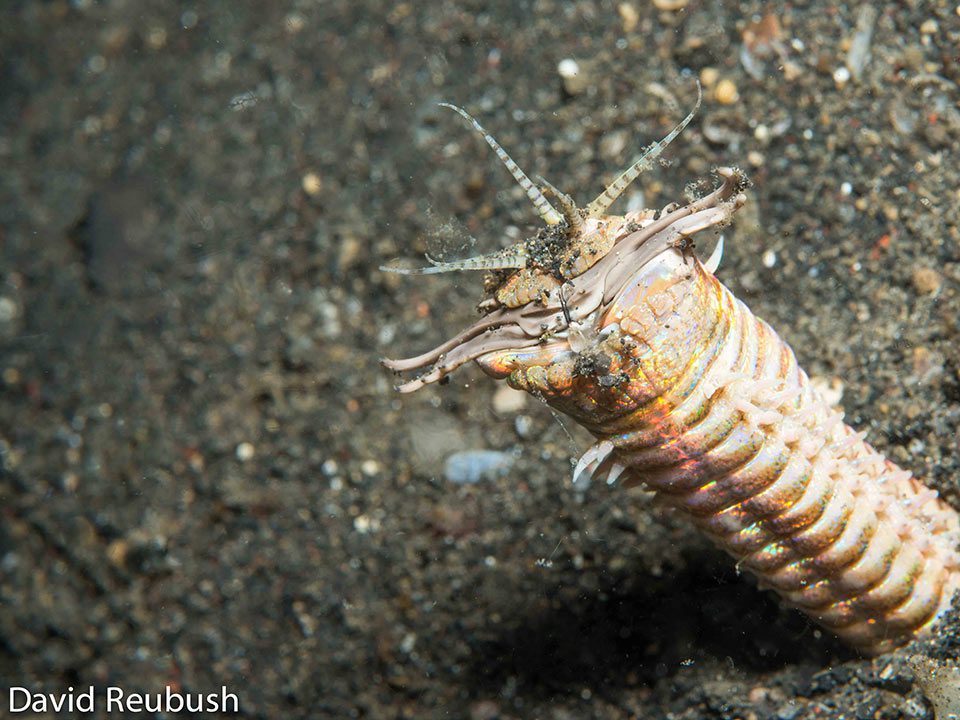 Where can Bobbit Worms be found in Lembeh?

Bobbit worms tend to move around from site to site in the Lembeh Strait but are most commonly found at Lembeh’s muck diving sites where it is easy for them to burrow in the sand. Air Prang and the Lembeh Resort House Reef are both great sites for Bobbit worm sightings while night diving throughout the year!

More About Marine Life in Lembeh?

If you are interested in the weird, rare and unusual marine life found in the Lembeh Strait, you may also be interested in reading some of these additional articles:

Planning your next dive trip? For more information about diving and staying with Lembeh Resort, email us at: [email protected].