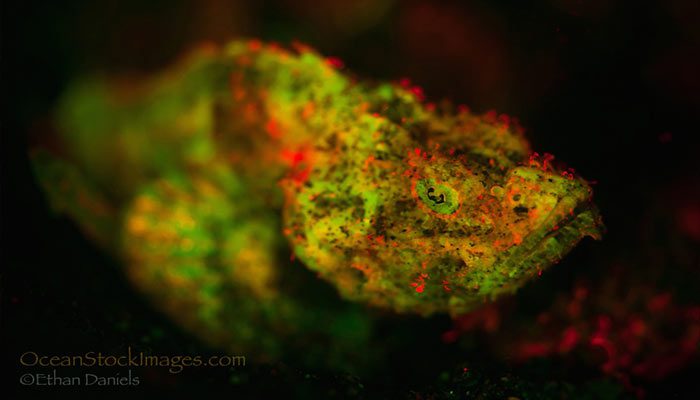 Things That Go Bump In the Night – Part I

Ok, so I admit it, I used to detest night dives. Tired, pulling on a cold, damp wetsuit for the fourth or fifth time of the day, knowing it was going to be chilly when clambering back onto the boat at the end of the dive… Night dives just didn’t seem worth the pain… To me, night dives were frustrating messes that I would rather be skipping to enjoy a frosty beverage under the stars. 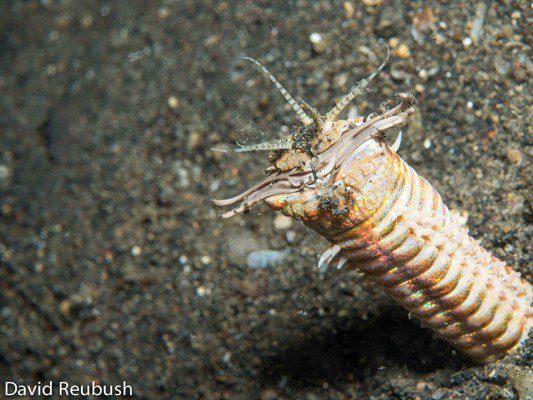 Then, 11 years ago, on the northeast tip of Sulawesi I found Lembeh and was shown the light. There’s something dreamlike to the night dives throughout the straight separating Sulawesi from Lembeh Island. Little monstrous creatures that are never found during daylight hours appear to be everywhere, emerging from the sand or slithering to and from coral clusters. A juvenile Batavia spadefish might be seen while a Bobbit worm pokes its hideous jaws out of the muck centimeters away. Then, a Starry Night octopus would be found scuttling across the sand past a well-camouflaged cuttlefish. Inevitably the guides discover something wacky, wild, and uber-rare but even the “common” species in Lembeh are unusual elsewhere in the Coral Triangle. As a burgeoning photographer, I thought I had found the most productive underwater paradise on the planet. And, I still think this way whenever I’m diving with [email protected]! 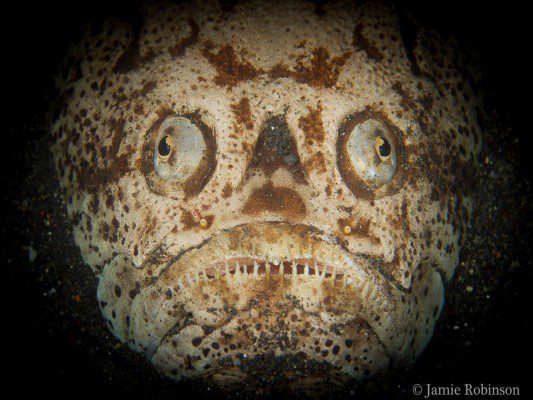 There’s just something about monsters that we, as humans, are attracted to. Look at all the Hollywood movies based around grotesque, hideous, man-eating creatures! One of the more monstrous fish found nocturnally at a few sites in Lembeh is the Whitemargin Stargazer. Though this predatory species never does more than wiggle its creepy tongue-lure to attract prey, it’s still one of my favourite critters of the night. – Ethan Daniels www.oceanstockimages.com 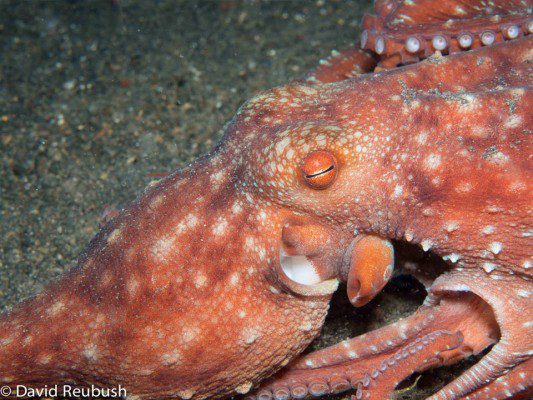 Where these octopus hole up during the day I have no idea but their name, “Starry Night,” is suitable as I have only ever seen this species at night. One of the cool aspects of this strange, eight-armed beast are the large suckers that are prominently displayed on each appendage. I always wonder how they keep track of coordinating all those suckers on all those legs… – Ethan Daniels www.oceanstockimages.com 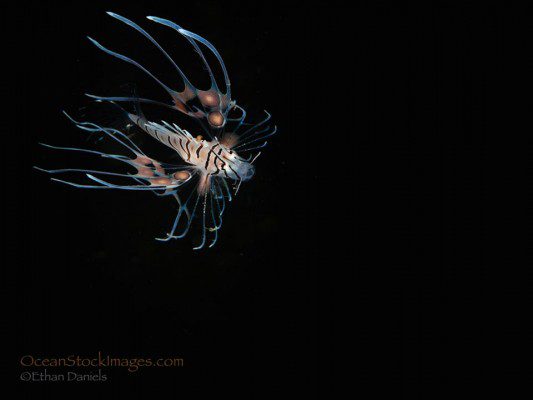 An observation made by frequent guest Patrick Villaume – “One thing that can be distracting is the presence of lionfishes. They come very close because night diving is often associated with mealtime. Indeed, many small fishes like cardinalfishes tend to be blinded by light, making them easy prey for lionfish. As lionfish are not afraid of divers, nor of sticks, they will stay close, and it is important to avoid hasty movements. However, not many lionfishes around Lembeh have realised how good an opportunity night divers torches pose, so they will probably not bother you here”, but this is one thing that you don’t want to bump into you during the night! 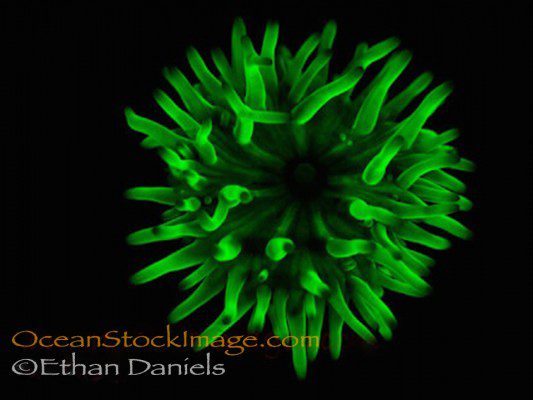 Of course I shoot fluorescence like everyone else out there. It is such a mystery to me (and the rest of the world) why so many marine organisms, from cnidarians to vertebrates, contain fluorescent proteins within their tissues. What is the evolutionary function? I have my own theories about the benefits of fluorescent proteins found in invertebrates and fish but whatever the true purpose it is fascinating to know that the rods and cones in human eyes are not evolved to detect fluorescence. – Ethan Daniels www.oceanstockimages.com 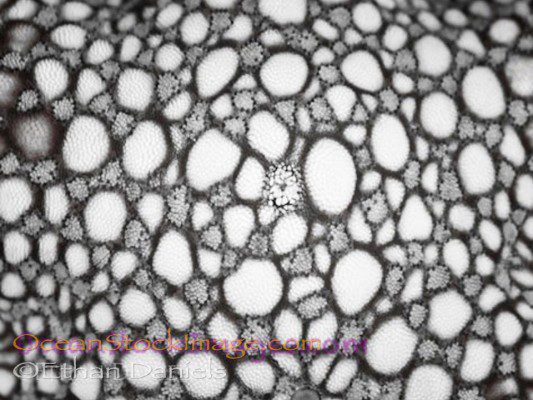 Mother Nature’s patterns and textures never cease to amaze me and I will often spend a good portion of any dive in Lembeh on easy to find abstract subjects. There is such simple yet intricate beauty in what natural selection has formed in the marine world over billions of years. – Ethan Daniels www.oceanstockimages.com 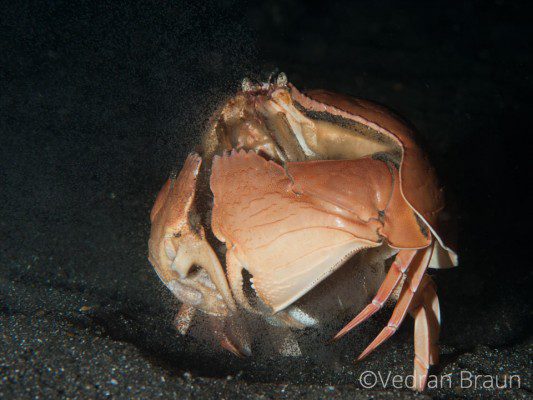 Female Calappa crabs may carry in excess of 2½ million eggs. As the embryos develop the eggs darken to a dirty brown colour and eventually hatch during the night, producing larval crabs.

Having worked as a dive guide for years in Micronesia, Ethan knows a thing or two about night dives. Ethan is a professional photojournalist who focuses his attentions on aquatic ecosystems. He regularly contributes award-winning images and articles to publications worldwide, guides trips, and provides UW photo workshops. 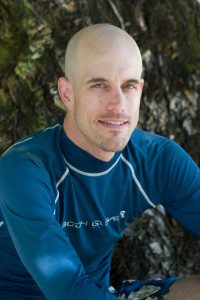 Ethan, a biologist by training, is based in Berkeley, California and his first book Under Cape Cod Waters was published by Union Park Press in 2010 and is available online. Ethan’s last book, Coral Triangle Seascapes, was published by Asian Geographic in 2012 and is available on Asian Geographic’s website. His most recent book Marine Life and Natural History of the Coral Triangle, will be available on Amazon soon. You can find more of Ethan’s work on his website at www.oceanstockimages.com