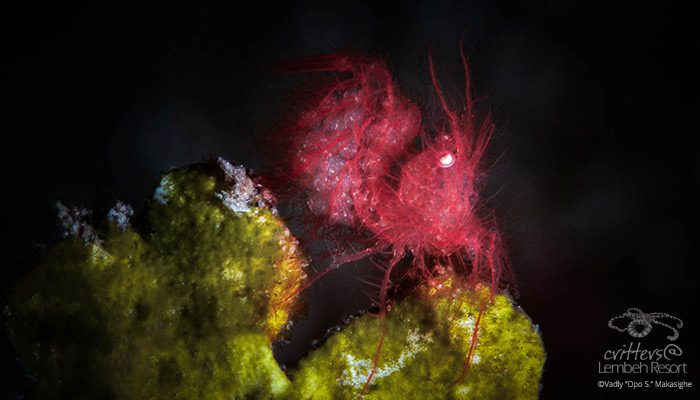 Divers and especially macro photographers in the Lembeh Strait who allow their eyes and camera lenses to wander to all of the weird and wonderful life forms that surround may be surprised when they find that the number of shrimps, crabs and other crustacean species in the Strait actually far outnumber the fishes and corals. Indeed, the crustaceans are second only to mollusks in terms of their diversity in the marine realm, with well over 30,000 species described to date and many, many more that have not yet even been named by science!

Most underwater photographers and divers will recognize crabs, shrimps and lobsters as crustaceans but this diverse group also encompasses isopods, amphipods, mantis shrimps and even barnacles! All crustaceans are in the Phylum Arthropoda; along with their terrestrial cousins the insects, spiders, centipedes and millipedes they all have an external skeleton (known as an “exoskeleton”), a segmented body and jointed legs. All crustaceans have two pairs of antennae at some point in their life cycle, and those that are most familiar to us are generally in the order Decapoda with five pairs of legs (this includes the crabs, shrimps and lobsters).

Most crustaceans are active at night, so avid amateur carcinologists should take advantage of every night-diving opportunity they are presented with to maximize their crustacean encounter rate. Those which are commensal with hosts such as anemones, sea whips or bubble corals are fortunately just as likely to be seen during the day….

Hippolytid shrimp are a group also known as the “broken-back shrimps” due to their unmistakably strange posture. The most well-known of these is the orange and white polka-dotted Thor amboinensis found commensally with many anemones, but in Lembeh, sharp-eyed divers may find the smaller and more cryptic “Hairy Shrimp” – so named due to the algal-like filaments it grows on its carapace (Phycocaris simularis). 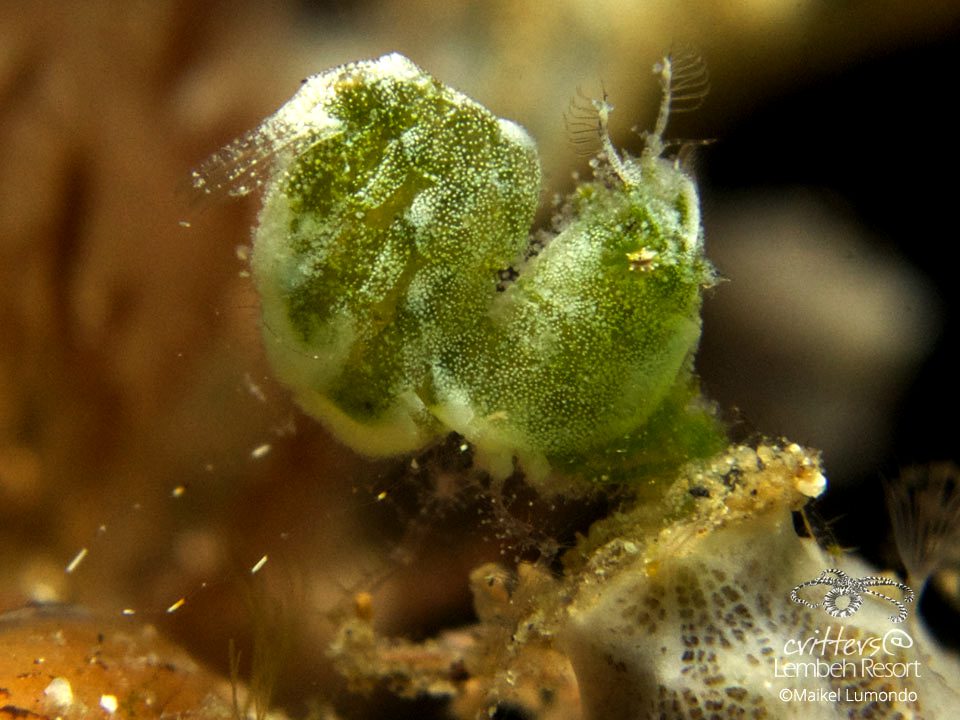 Another of the broken-back hyppolytid shrimps, this apparently undescribed green shrimp resembles the calcified green algae Halimeda, on which it frequently hides. They are very small in and grow up to only 3mm to 5mm but it is still possible to find them when you know where to look. Lembeh is full of undescribed crustaceans which are excellent subjects for underwater macrophotography! 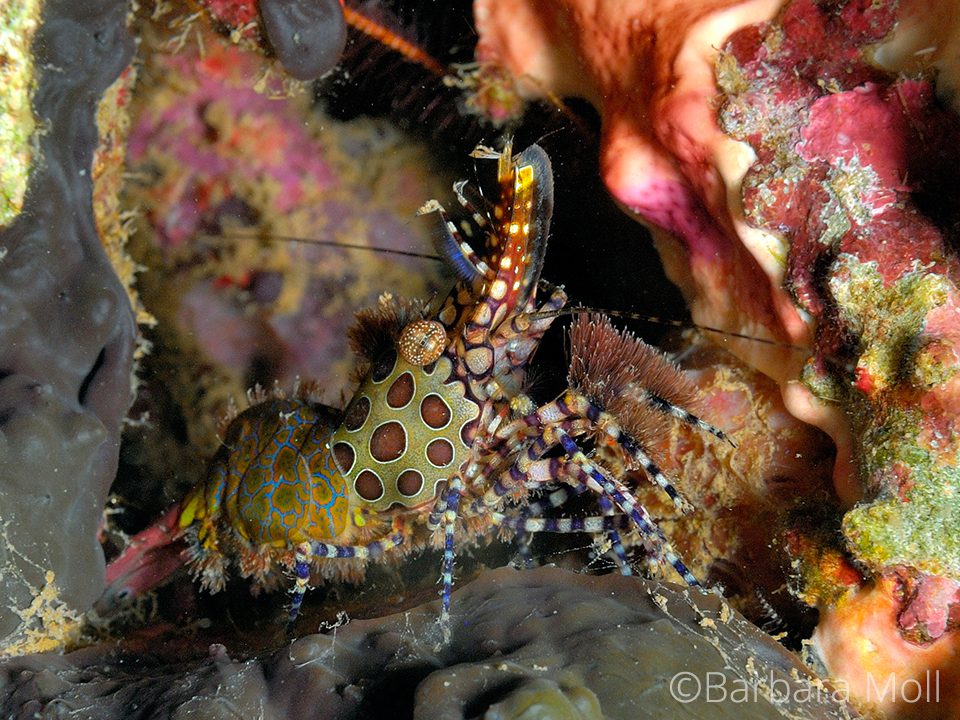 Hidden away in branching coral colonies during the day, Saron shrimps emerge at night to show their often spectacular coloration which ranges from being transparent to cream with red or brown spots surrounded by white and striped legs. Sometimes known as marble shrimps, this group is surprisingly poorly studied and many of the species encountered by divers (including this one) are still undescribed. They are found nocturnally amongst coral and rubble at depths of 3 meters – 30 meters and they feed on parasites, algae and plankton. They grow to a length of around 6 cm and are cleaner shrimps – often if a divers hand is near to them they will hop on board and perform a “manicure”. They are generally respected by other creatures, often sharing burrows and holes and working as housekeepers. They will wave their antennae around to attract “customers”, and they then proceed to clean outside and inside the creatures mouths, gills, etc. 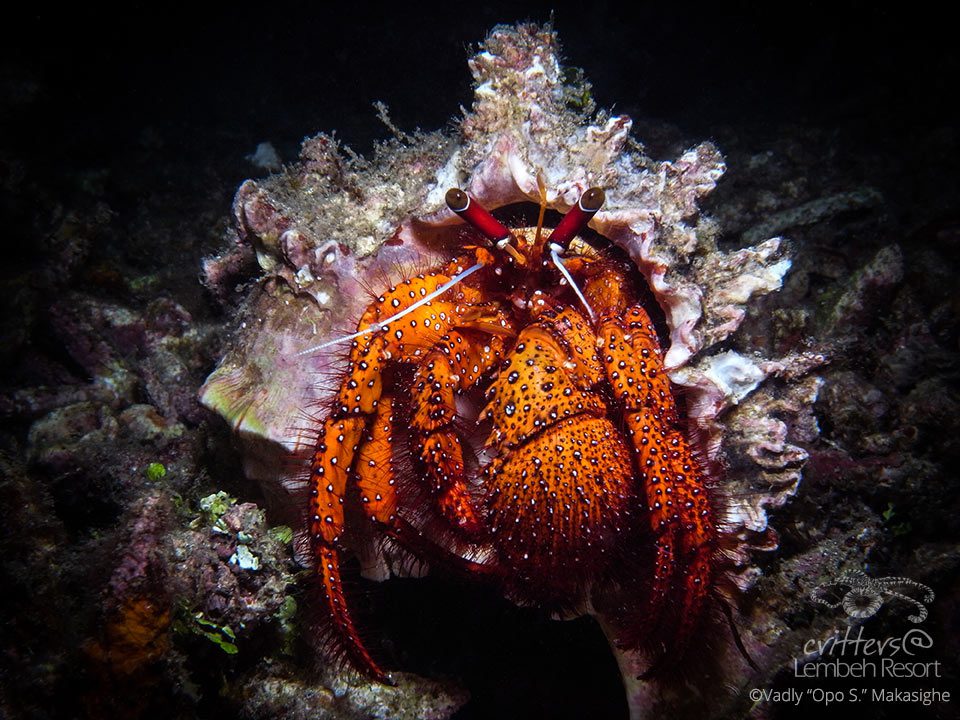 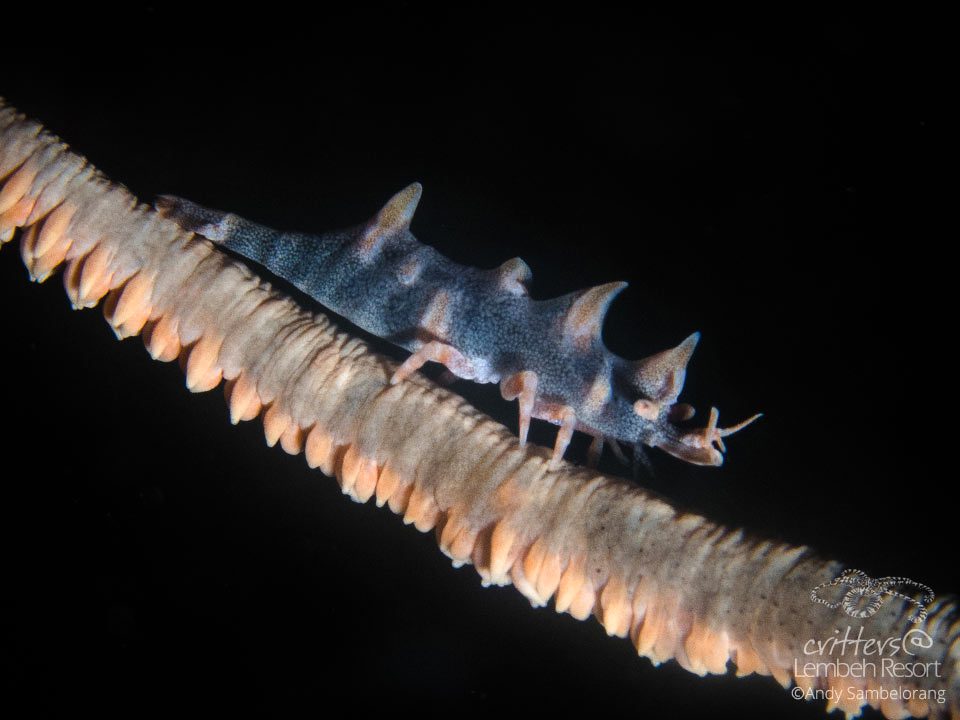 Many crustaceans rely on camouflage to protect them from predators while others have sharp carapace spines as protection. The dragon shrimp uses a combination of both; it’s difficult to see on the commensal black corals and sea whips upon which it rests, but just in case, it also sports a number of tooth-like spines down its back. They are usually green with yellow-tipped spikes on their backs but colors vary from green to white depending on the color of the whip coral host – they can be found at a number of Lembeh dive sites. 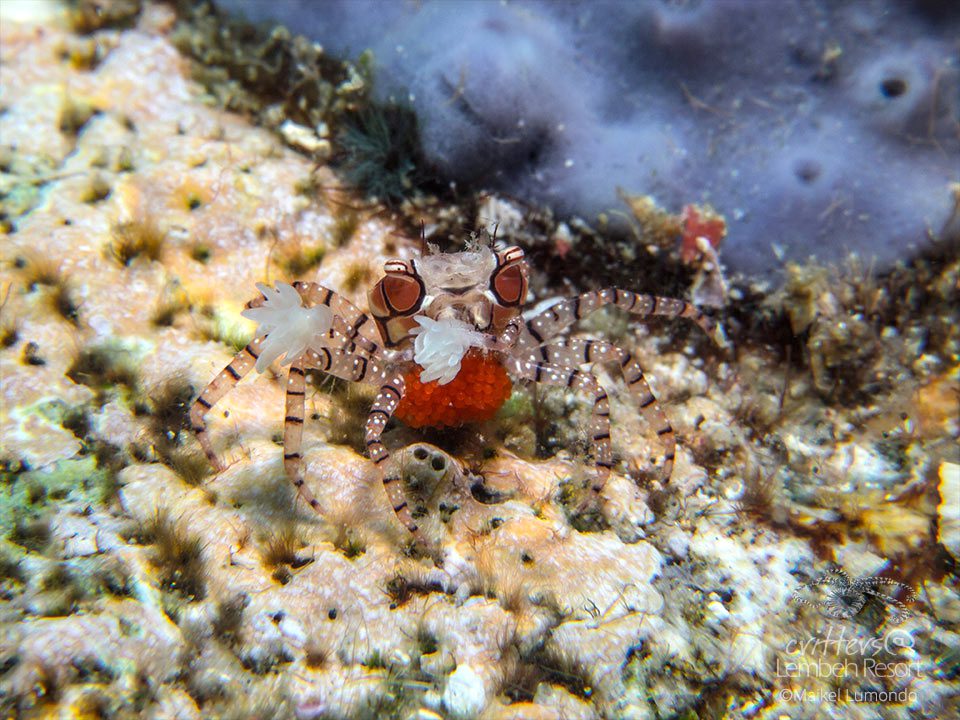 The “boxer crab” is found in shallow waters throughout the Indo-Pacific region – usually under rocks or rubble. When uncovered, it raises its anemone-covered claws in a protective boxing stance! Though helpful for defense, the primary reason for cultivating the anemone “gloves” is apparently to help in feeding! The boxer crab lives in a mutual relationship with the small anemone “gloves” – The anemones apostrophe stinging cells protect the boxer crab against predators and in return the boxer crab provides food for its protectors. Boxer crabs move very fast and are therefore difficult to find – a good guide (such as those at critters@LembehResort) is essential.

This is another shrimp from the broken back family which has a flattened body in a variety of colors. Paron shrimp have a covering of small dark spots to match the host sponge on which they are living. These shrimp are extremely well camouflaged and incredibly difficult to find if you don’t have help from a top class critter spotting guide! 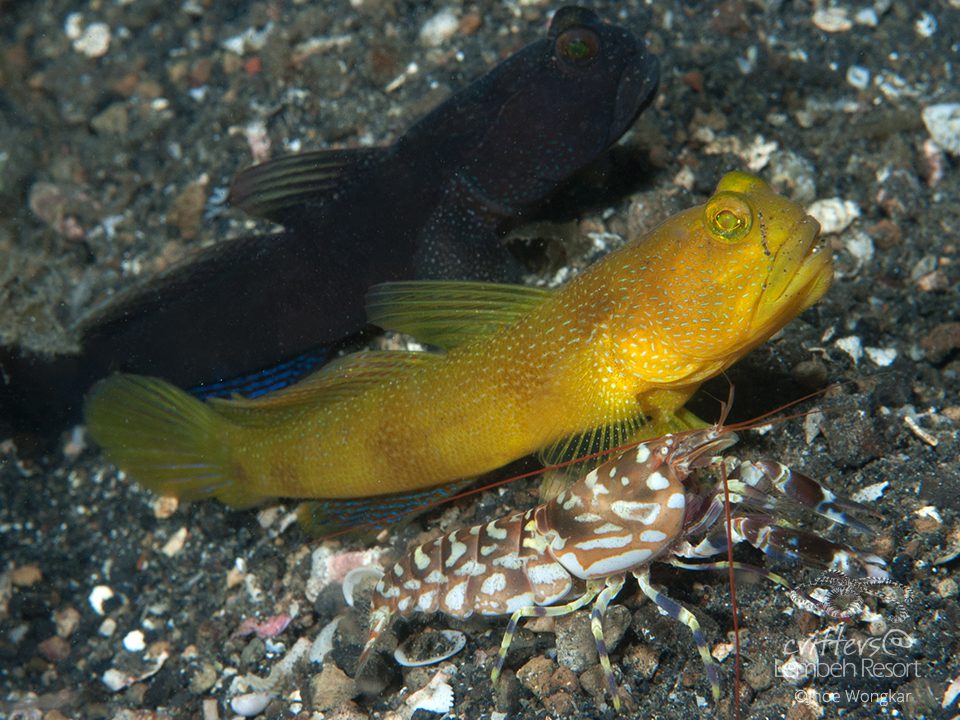 Those that venture out “muck diving” on to the bare sand slopes of the Lembeh Strait will frequently see brightly colored gobies perched outside an obvious burrow entrance. With a little patience, you’ll soon get a chance to see the industrious snapping shrimp that actually excavates and maintains the burrow. These shrimps have poor eyesight and rely upon the goby to basically act as the “security guard” outside the burrow; if the goby sees an approaching predator it will signal with a flick of its tail to the shrimp to be careful, or disappear into the burrow if the predator continues to approach. Alpheus bellulus can grow to a size of up to 4 to 5 cm, not including the antennae (which are usually red). The background color of the body is yellowish white or plain yellow with patterns drawn on the cephalothorax, abdomen and tail which are irregular but symmetric. Their coloration can vary from light brown, brownish purple to brownish orange and their legs are banded with the same colors as the body and covered with short bristles. Snapping Shrimp can be found on sandy, muddy and detrital substratum in shallow water up to around 20 m. 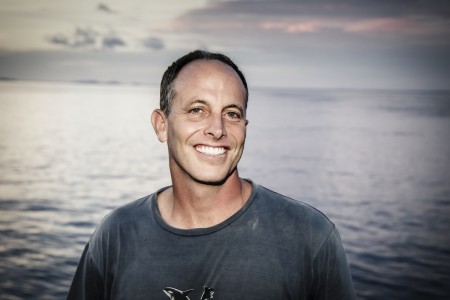 Dr. Mark Erdmann in 2005  was named a senior advisor to Conservation International’s Indonesian Marine Program. His specific focus is on improving the conservation and science-based management of the ultra-diverse coastal and marine resources of the Raja Ampat Corridor, within the Bird’s Head Seascape in Indonesian Papua.

Prior to joining Conservation International, Erdmann was the Marine Protected Areas Advisor for USAID’s Natural Resources Management Project in Indonesia, where he has lived for many years. His work with USAID focused on developing the Bunaken National Marine Park co-management initiative in cooperation with villager, marine tourism private sector and government stakeholders, and applying lessons learned from this management “laboratory” to reform Indonesia’s national MPA policy.

Erdmann’s planned postdoctoral research project on Indonesian coral reefs was interrupted by the chance discovery of the coelacanth Latimeria menadoensis, which had up to that time been thought extinct. He worked closely with Indonesian authorities to develop a national conservation strategy for the coelacanth. This work culminated in a regional law outlawing the shark nets that occasionally catch coelacanths, a national law declaring the coelacanth a protected species, and eventual CITES Appendix I protection.

For as long as he has lived in Indonesia, Erdmann has been involved in reef surveys throughout Indonesia, discovering and describing 15 new species of mantis shrimp while helping document biodiversity patterns and prioritizing reef systems for conservation interventions. He has also worked collaboratively with several marine geneticists to describe patterns of connectivity between Indonesian reef systems as a basis for the siting of MPA networks in the “Coral Triangle” center of marine biodiversity.

Mark have collaborated authors with Gerry Allen of the recently published Reef Fishes of the East Indies,  on many projects and research papers, and have spent countless hours underwater in Indonesia and beyond.