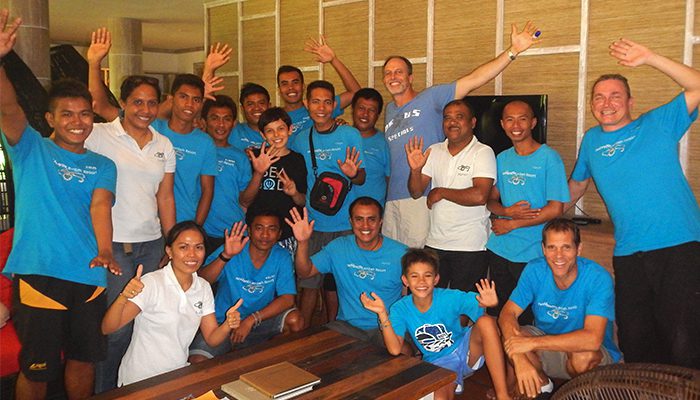 It seems that North Sulawesi, and Lembeh Strait in particular, is continuously full of surprises. For the fourth time in a row since 2012, our ongoing reef fish biodiversity surveys here have turned up more new records and likely new species! By the end of the Lembeh Resort and Critters@Lembeh Resort Fish Geek Week 2016 (14-21 July 2016), we’ve added another 21 new records to our species list for North Sulawesi, bringing the grand total to 1144 species of reef fish representing 370 genera and 94 families! This is the second highest number of reef fish species recorded for an area this size anywhere in the world; only Raja Ampat, where we’ve put in significantly more survey effort (in an area considerably larger than North Sulawesi), has more recorded reef fish species (current total of 1565 species). Importantly, the “species accumulation curve” for North Sulawesi has shown no sign of flattening out – meaning we definitely expect that with more survey effort, the number of recorded species will most certainly continue to grow! 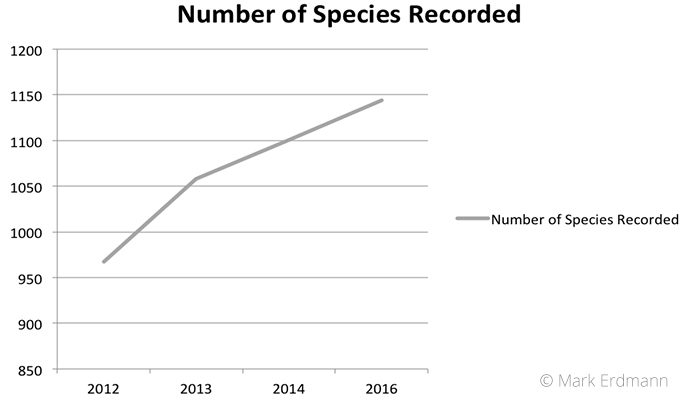 The “species accumulation curve” for four “fish geek weeks” in North Sulawesi from 2012-2016; note the curve is by no means “flattening out”, such that we expect to continue to add more species to the list with further survey effort!

Included in our interesting finds this year were several potentially new goby species. Perhaps the most spectacularly coloured of these is a beautiful yellow-orange goby in the genus Priolepis that our guides found living under a sponge at Rojos. We’re currently working with the world expert on these gobies, Dr. Rick Winterbottom at the Royal Ontario Museum, to determine if this is indeed a new species. We also documented a sand goby on a night dive at Jahir that has my colleague Dr. Gerry Allen perplexed – we’re not even sure what genus this one is in! Stay tuned for more details… 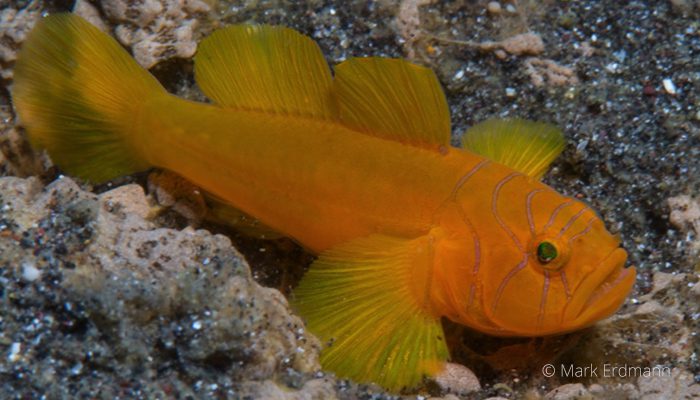 A strikingly-coloured goby in the genus Priolepis. While we are still confirming, this one appears to be new! 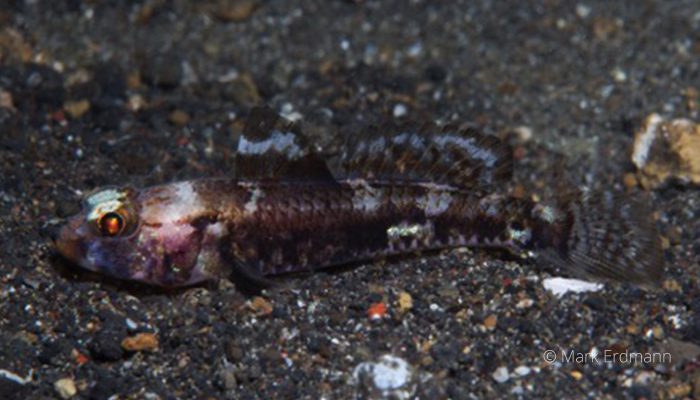 An unidentified sand goby found during a night dive at Jahir – we’re not even sure of the genus on this one!

In addition to these possible new species, we also documented a number of additional new records for North Sulawesi, including the pointed-nose stingray Pateobatis jenkinsii, the spotted boxfish Ostracion nasus, the pipefish Halicampus grayi, and the cardinalfish Ostorhinchus monospilus (all shown below). 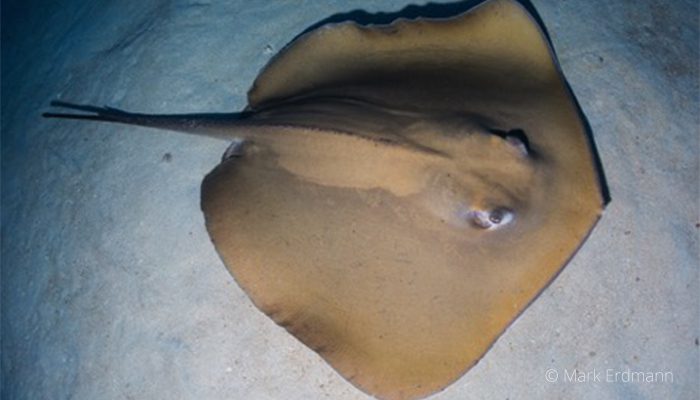 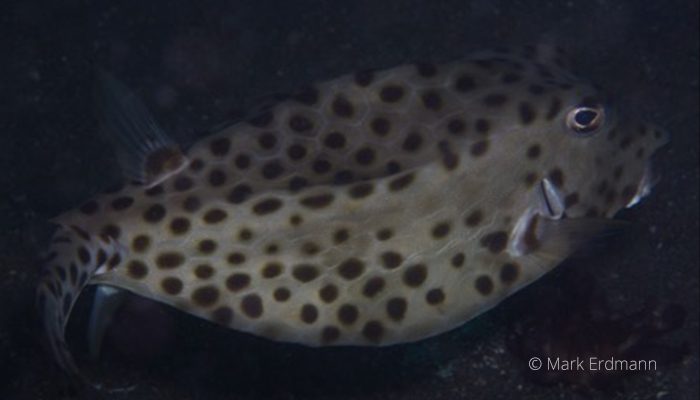 A beautiful boxfish photographed at 30m at Rojos – Ostracion nasus 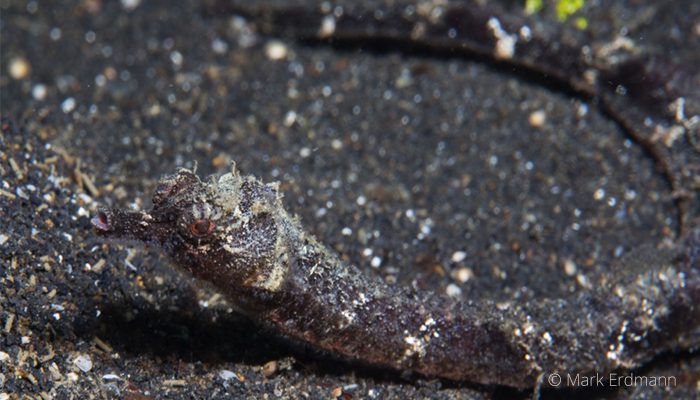 This pipefish, Halicampus grayi, was also recorded for the first time in North Sulawesi

Other exciting new records included the dottyback Pseudochromis perspicillatus, a juvenile Platax batavianus batfish, and the beautiful triplefin Ucla xenogrammus. We also recorded a couple of rarely seen gobies – Callogobius hasseltii and Gnatholepis yoshinoi – both of which were recorded between 12-20m depth at the TK dive sites. 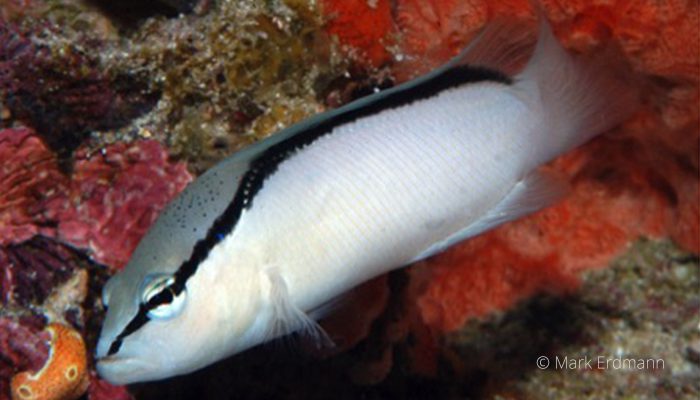 The “bandit dottyback” Pseudochromis perspicillatus was also recorded for the first time in North Sulawesi, bringing the total number of dottybacks recorded in this region to 16 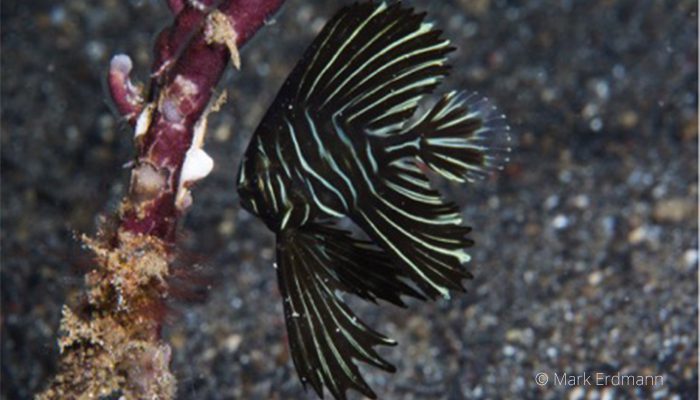 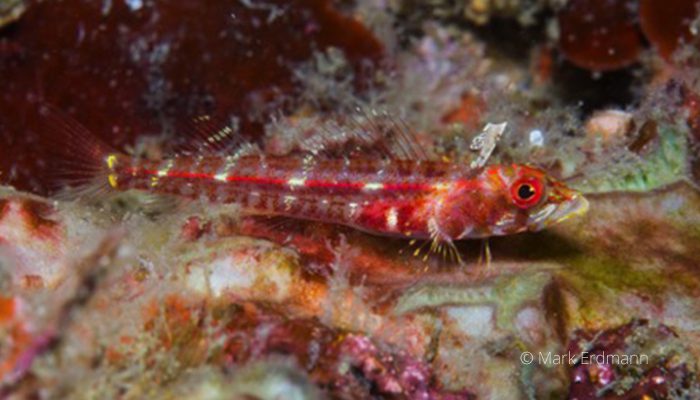 The beautiful triplefin Ucla xenogramma was also added to the list 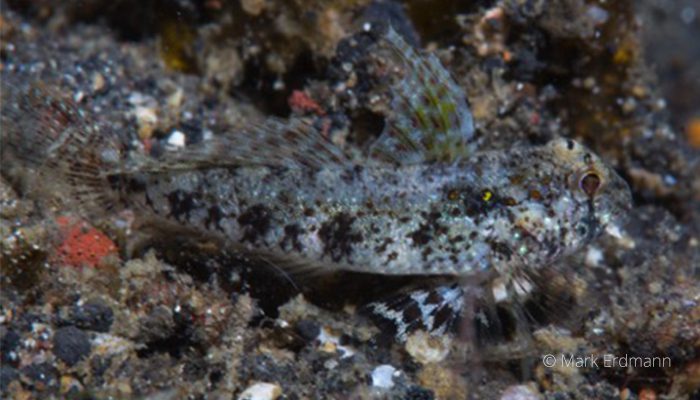 The goby Gnatholepis yoshinoi was not previously known from Indonesia, but proved to be quite common on the black sand slopes of the TK dive sites in particular 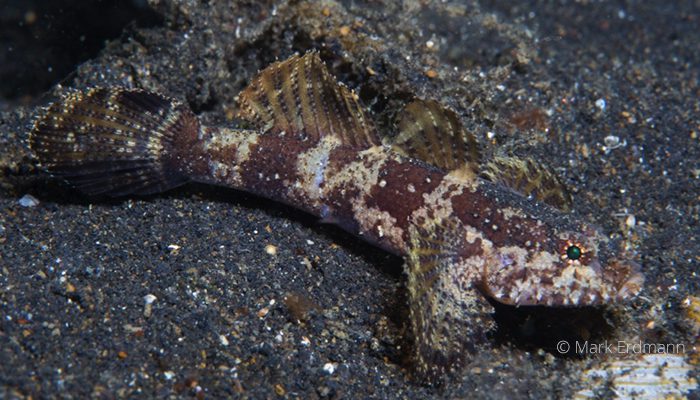 Perhaps my favorite find of the trip, however, was the pugnose pipefish, which is found only in Galaxea corals. After the strong efforts of Ned and Anna Deloach to find and photograph this unique species in West Papua, subsequent searches have shown this species to be relatively widespread around eastern Indonesia – but requires a sharp eye to spot it amongst the corallites of the Galaxea colonies. I was also delighted when Lauren pointed out a beautifully-colored juvenile Pseudochromis erdmanni dottyback – the first time we’ve managed to photograph this color-phase of the species. 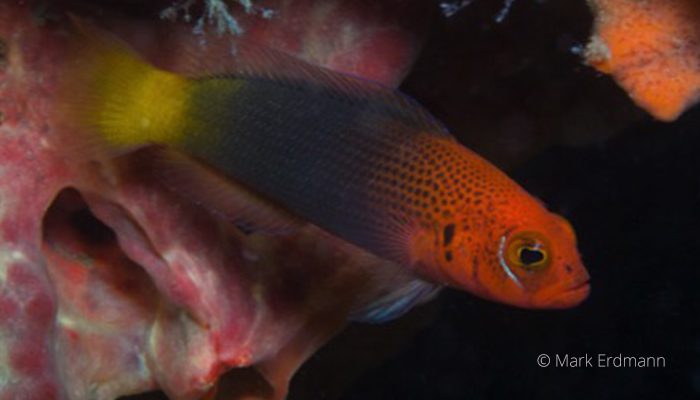 All in all, a very successful, if far too short (!) week at the beautiful Lembeh Resort. Very much looking forward to the next set of surveys in Lembeh – hopefully next year! Thanks once again to Danny, Lauren and Sascha for hosting me, and to the ever-friendly and gracious dive guides, boat crew and resort staff of Lembeh Resort & Critters@Lembeh Resort.

Mark Erdmann is Vice President of Asia-Pacific Marine Programs for Conservation International and is now based in New Zealand after 23 years of living in Indonesia. A mantis shrimp expert by training, for the past 12 years he’s worked closely with Dr. Gerry Allen to explore and describe the reef fish biodiversity of the region, culminating in the recent 3-volume book (and tablet app) series, Reef Fishes of the East Indies.