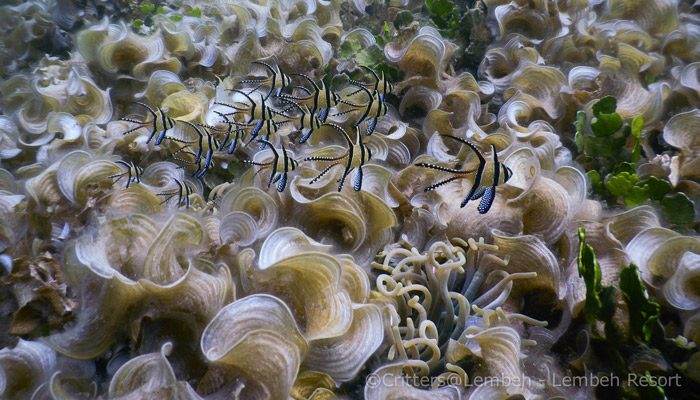 In 1996 a live specimen of this fish was brought to my lab. It was a male incubating eggs in its mouth and I realized this fish was unique compared to other cardinalfishes: the eggs were much bigger than those of other species (and I found that the Banggai cardinalfish only produce about 65 to 70 eggs, rather than the thousands of eggs that other apogonids typically produce). Because the eggs are so big, the embryos develop into large yolk-sac juveniles that after hatching they will remain inside the parent mouth consuming the yolk and developing directly into juveniles, and hence bypassing the larval period. Thus, the Banggai cardinalfish lacks the typical planktonic-dispersing phase characteristic of most coral reef fishes. I found these unusual characteristics fascinating and decided to study this fish.

There is no apparent morphological differences but after mating the male can be distinguished by his enlarged mouth where the eggs are incubated.

From fertilization until the embryos are ready to hatch takes about 18 days, and then about one more week before they finish consuming the yolk inside the male’s mouth.

No, the Banggai cardinal fish releases the juveniles directly into their own hosts (anemones, sea urchins), therefore within their own habitat (coral reef, seagrass).

Well it depends on whether they can avoid predation. But they possibly could live 4 years in the wild.

I found a few more cardinalfishes presenting a similar unusual (absence of larval dispersing period = direct development) reproductive biology, and all inhabit the Australian continent. Among them, Quinca mirifica, which inhabits western Australia, and males displays a dramatic ephemeral dichromatism (color change) during mating.
After long thought and extensive research I came to the conclusion that the similarities in the reproductive biology between the Banggai ardinalfish, which is endemic to the Banggai Islands and those cardinalfishes presenting direct development and living relatively far away in Australia, are likely an indication of a close evolutionary relationship. It is possible that all these species descend form a common ancestral population originally inhabiting the Australian plate and during Cenozoic times they radiate into different species. It is likely that the Banggai cardinalfish diverged from that ancestral population during the movement of the tectonic plate containing what is today the Banggai Archipelago ( which is a micro-continent originally attached to the Australian margin). It was during this process that the fish were brought close to Sulawesi and eventually diverged into a new species in the Banggai Islands.

I discovered them in Lembeh in 2001 at 2 dive sites, Police Pier and Serena Kecil, and in 2007, I found the fishes had spread elsewhere in the Strait. Now in 2015, I’m doing another survey to see how far the fish has spread in both north & south Lembeh Strait. It’s also possible they will continue to spread over more areas in the future.

Do Banggai cardinal fishes exist in other places besides Lembeh?

Yes there are several places where they have been introduced, including Luwuk (central Sulawesi), Manado, Tumback ( in North Sulawesi), South Sulawesi and east Java. In all instances the artificial introductions were made by traders and exporters, but except for the Lembeh population, the rest are relatively small populations.

They are planktivorous carnivores, and they mostly eat copepods and other micro-crustaceans, but they are generalists fish that prey on a variety of small demersal organisms.

Yes, they are listed on the IUCN Red List of threatened species as endangered due to the dramatic decline in abundance that its populations have experienced and also to the deterioration of its habitat The species has low fecundity and overall low productivity, and because of their desirability as aquarium fish, it is over-collected (and 50% of the fish taken for the aquarium trade die before they even reach the consumer).

Dr Vagelli will continue to study this fascinating and unique fish and its relationship with the ecosystem, and has already planned an extensive survey in the Banggai Islands in March of 2015. Stay tuned!