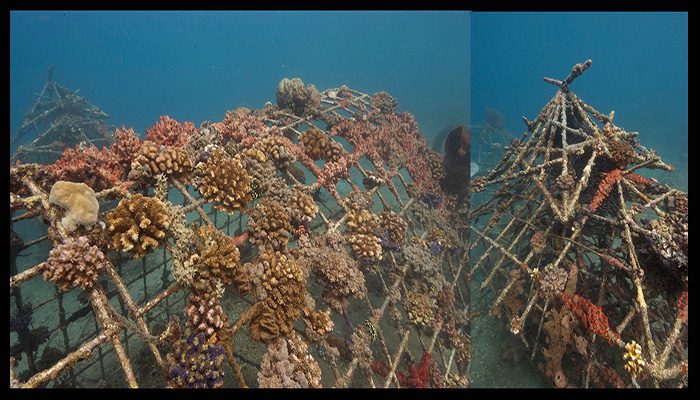 A house reef project in front of Lembeh Resort was first started in 2006 by [email protected]  There were two main aims of this project: to create more habitat for our critters and to simply make our house reef dive more interesting and safe for our guests by placing interesting artificial reefs and an underwater trail to safely guide them to the most interesting parts and projects.

We initially concentrated on placing the majority of our house reef installations  in front of the resort in the central house reef area spreading from the coral rubble at 7 meters to the sandy bottom at 24-meters depth. A few concrete blocks were also placed on the right hand side of the house reef.
The newest additions to the project were placed in front of the resort and to the left. 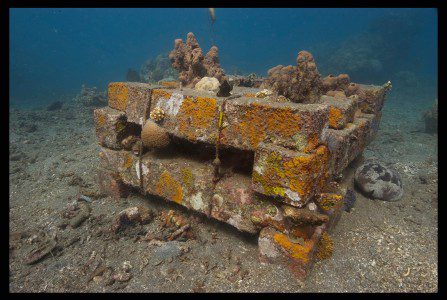 The first thing we did was to install concrete blocks in order to transplant coral fragments onto them. The corals we have transplanted have not succeeded in most cases, but as we observed while diving the house reef in June 2014,

new coral colonies have started to settle and grow on them. These colonies are encrusting forms of coral species, from several families, i.e.: Faviidae or Poritidea. As these belong to the slow growing species of hard coral, it simply takes time for them to create significant coral cover. However, because these species are slow-growing they are less likely to be affected by excessive sediment or breakage by fins, the two biggest problems on our house reef. The concrete blocks also have other sedimentary growth, such as sponges and ascidians and provide additional reef structures in areas that previously were only coral rubble. The concrete blocks that succeeded the most were the ones we piled up on each other to create fish “houses”.

Another step in our house reef project was to install three Biorocks; the Tunnel, the Blog and the Pagoda. Biorocks are simply iron bar structures placed underwater with a slight electric current running through them. The 12V electric current is generated on land and then led to the structures via cables laid on the sea bottom and attached to the structures as well as to titanium mesh anodes installed on the outside of the Biorocks, together creating an electromagnetic field.

This electromagnetic field then accelerates the CaCo3 (Calcium Carbonate) deposition onto the Biorock itself, making the structure stronger and that provides more suitable conditions for hard corals spats (settlement) and for a faster deposition, therefore a faster growth of hard corals manually transplanted onto the Biorock.

There is no longer electricity leading to the biorocks due to technical difficulties inherent with this remote location. However there are still some original coral colonies on the biorocks and also many new ones, mostly massive forms, which is great. Many sponges have settled onto them and quite a few cleaner wrasses.  Hence, the Blog, in particular serves not only as a hideout for fish but also as a cleaning station.

Two ropes were installed in the deep part of the house reef. One was anchored down on the sea floor from about 22-26 meters depth to attract some of the critters such as Antennarius pictus (painted frogfish), shrimps, and nudibranchs. For example one of the cannibalistic species of nudibranch, Gymnodoris impudica, is regularly seen there hunting smaller nudibranch species. The second rope was placed vertically from about 25 meters up (not all the way to the surface to prevent local fishermen to use this as a mooring). This rope was to give squids a place to lay their eggs and to give our guests the chance to observe this behavior first-hand and on their own time.

The horizontal rope is still in place and is currently a hotspot for flamboyant cuttlefish hatchlings as well as attracting sponges, shrimps and nudibranchs.

The wreck. Our last big contribution to the house reef project was to sink a 10-meter long wooden boat in December 2007. We chose a sandy patch in about 24 meters just next to the vertical rope. To sink the boat we cut big holeszin the hull and placed many rocks inside. The wreck sat beautifully on the sandy bottom and from day one attracted schooling fish such as Lutjanus kasmira (Bluestripe snapper) and Heniochus acuminatus, (Long finned bannerfish). Due to the effects of the warm salty water and marine organisms, the wreck had almost collapsed when we visited in 2009 and by June 2014, the only thing left was the pile of rocks. 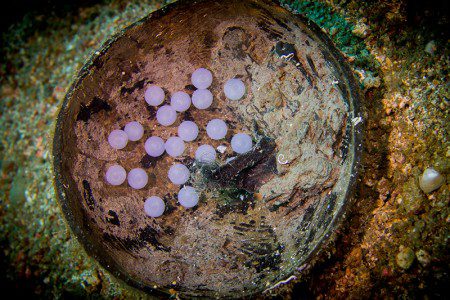 After I saw a couple of flamboyant cuttlefishes (Metasepia pfefferi) in 2007, I placed a few empty coconut shells just above the wreck on the sand in a hope that the flamboyants would lay their eggs there and surely enough, they did. This gave us an incredible opportunity to observe the development of the flamboyant eggs up till their hatching. There are still coconut shells on the house reef, which were recently placed with the help of a young guest who was eager to make a contribution to our house reef and lately we have observed many flamboyant cuttlefish eggs, both in coconut shells and other empty sea shells.

The new additions to the house reef project were a sponge rope mesh at 22 meters in front of the resort and volcanic rock piles on the left side of the house reef. Both were great ideas as they used natural materials and provided different settlement possibilities. The sponge rope mesh has a great amount of fish around it and the volcanic rock piles seem to provide much more successful coral settlement substrate than the concrete blocks.

We hope that during your visit to Lembeh Resort you will take the opportunity to dive this unique and prolific house reef.

Kat and her husband, Johan Bengtsson, worked for [email protected] in 2006 / 2007. There they did a similar house reef project as they have done now here at Murex Manado & Bangka. Kat is a marine biologist and graduated in 2005 as Bachelor of science in Marine biology from James Cook university in Townsville, Australia. Below a picture of Kat & Johan with their 3 kids, Vicki & the twins, CLaudia & Vanessa.