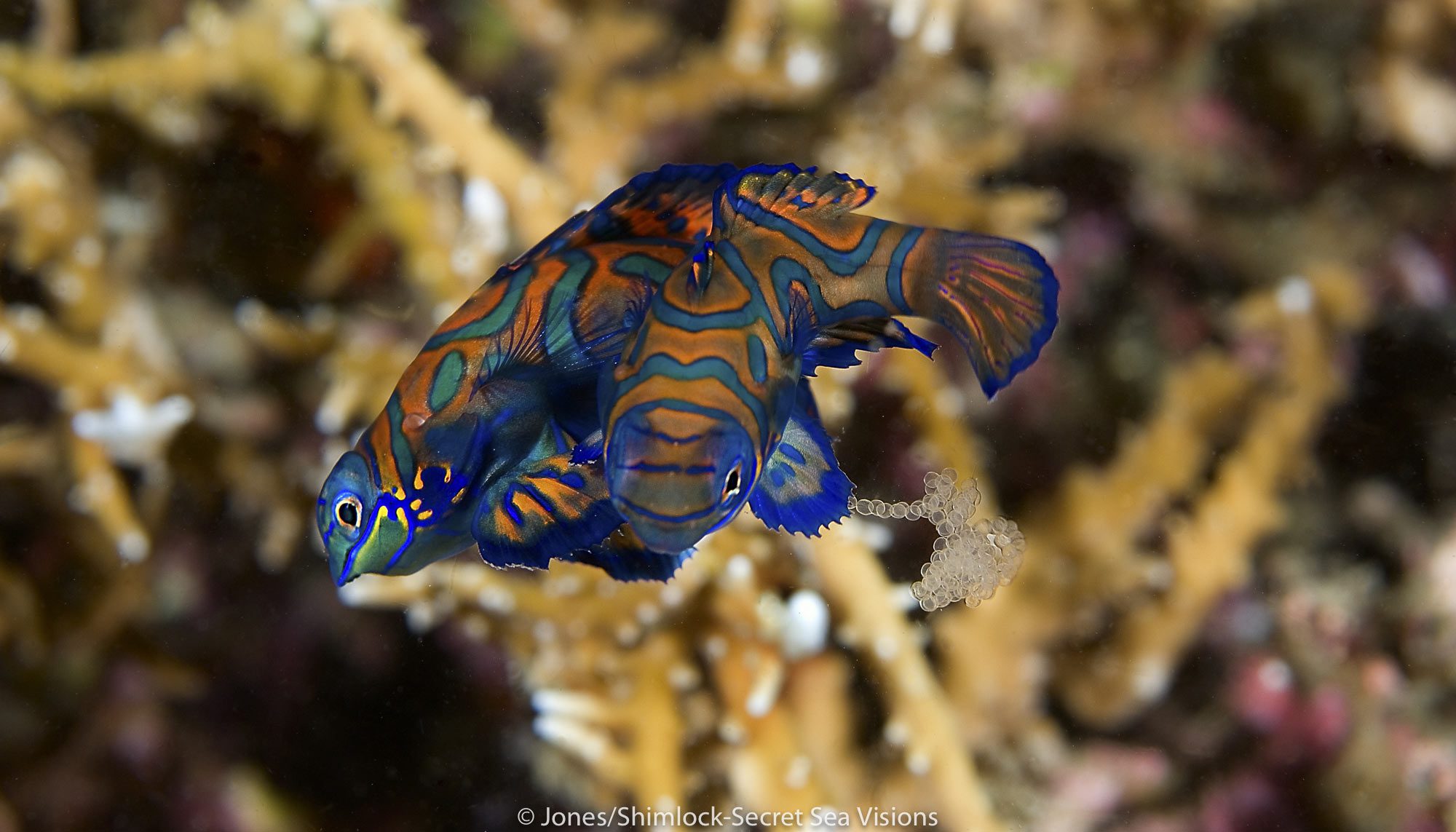 Back in the 1990s, when Lembeh’s sites were on the cusp of discovery, we branded its incredible array of muck dives “The Twilight Zone”. The “twilight” part referred not only to the stranger-than-reality science fiction television show, but also to Lembeh’s obscure animals and their cryptic relationships. Observing these crazy-looking critters’ weird behavior often made us feel like paparazzi invading an invitation only post-performance party, where rock and roll reigned supreme and Mick Jagger lookalikes strutted their stuff to impress the opposite sex. In Lembeh (apologies to that great songwriter, Robert Earl Keen), “the muck goes on forever and the party never ends” Volcano: At Lembeh Resort, there’s often a lot of rock and roll above the surface. Don’t forget to take advantage of the fantastic topside photo ops. 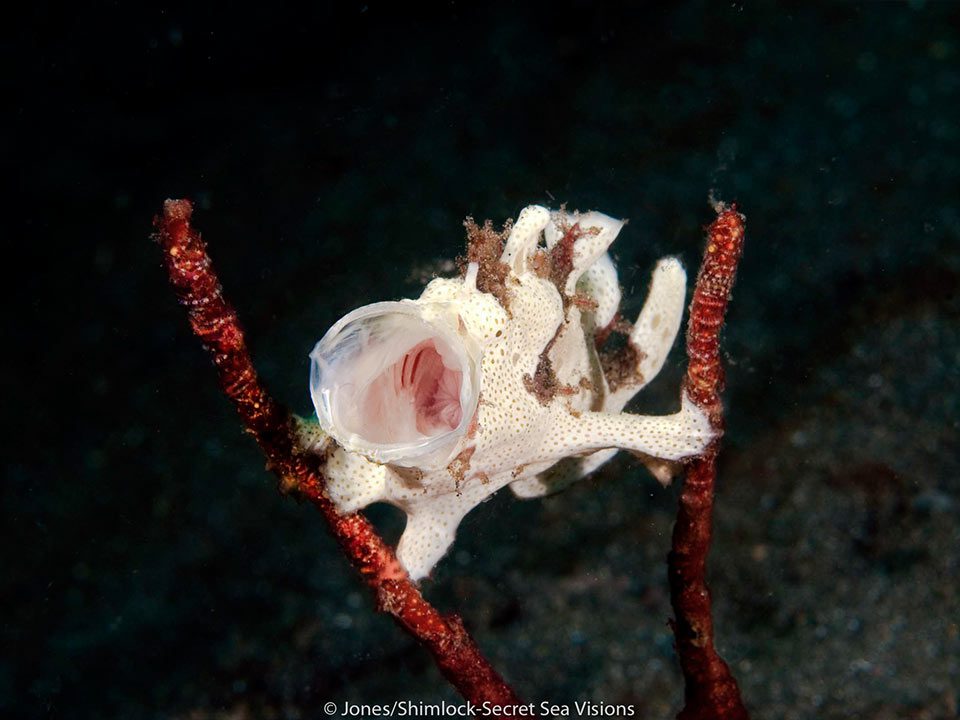 Frogfish yawning: If this frogfish isn’t competing with the Stones’ “Sticky Fingers” logo, it’s giving Mick a run on who has the biggest mouth. 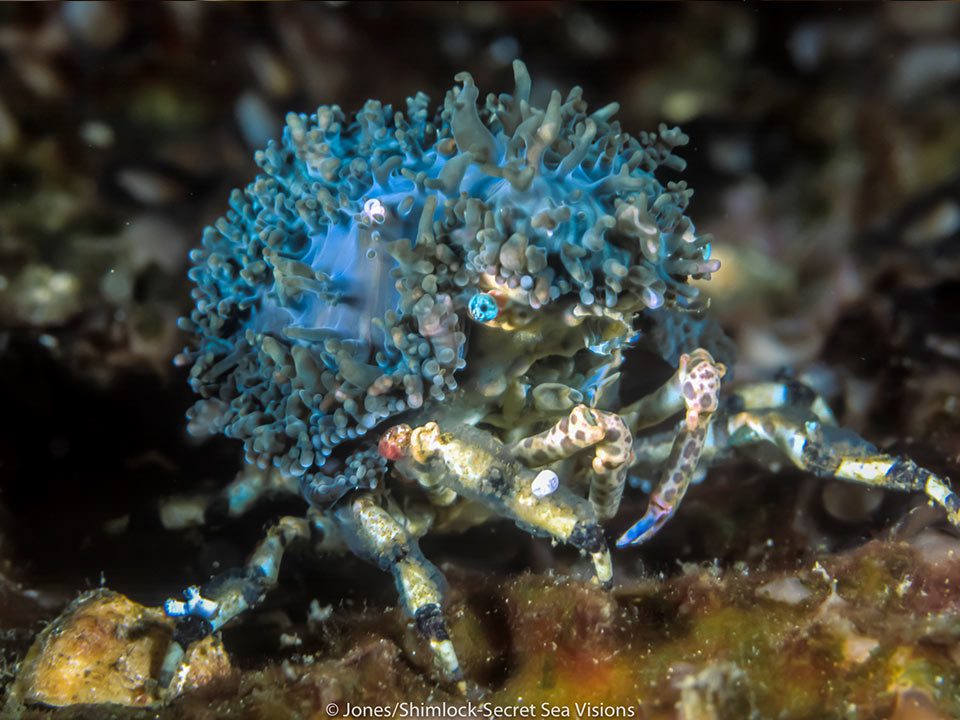 Decorator crab: When night falls, Lembeh’s stars don stage costumes to step out. This decorator crab has chosen a wig of living corallimorpharians. 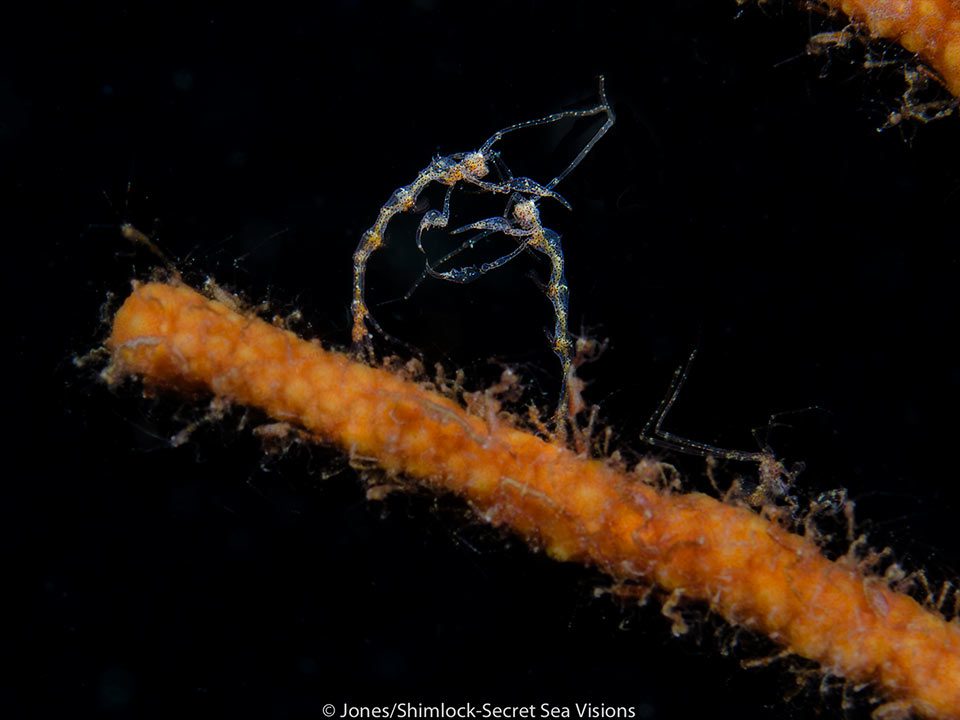 Skeleton shrimp: Rock stars abound in the strait, and they often fight over territory and partners, like these skeleton shrimp battling on a sea whip. 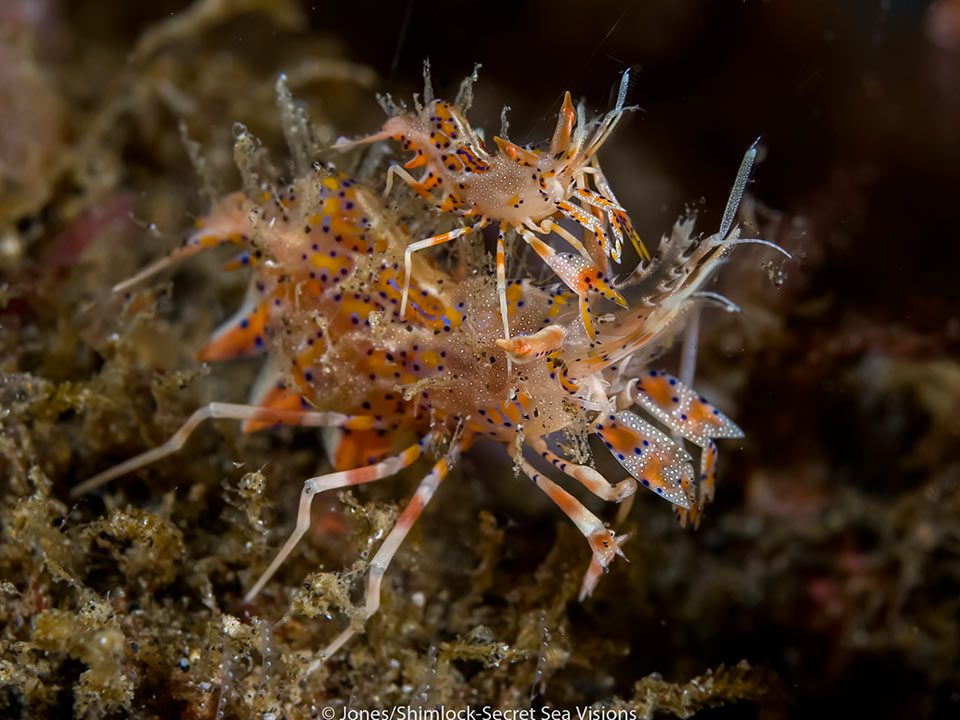 Tiger shrimp: Often the party ends with hook ups between groupies and exhibitionists. These ostentatious tiger shrimp are preparing to mate, so the smaller male has climbed on top of the larger female to stimulate her desire before they mate abdomen to abdomen. 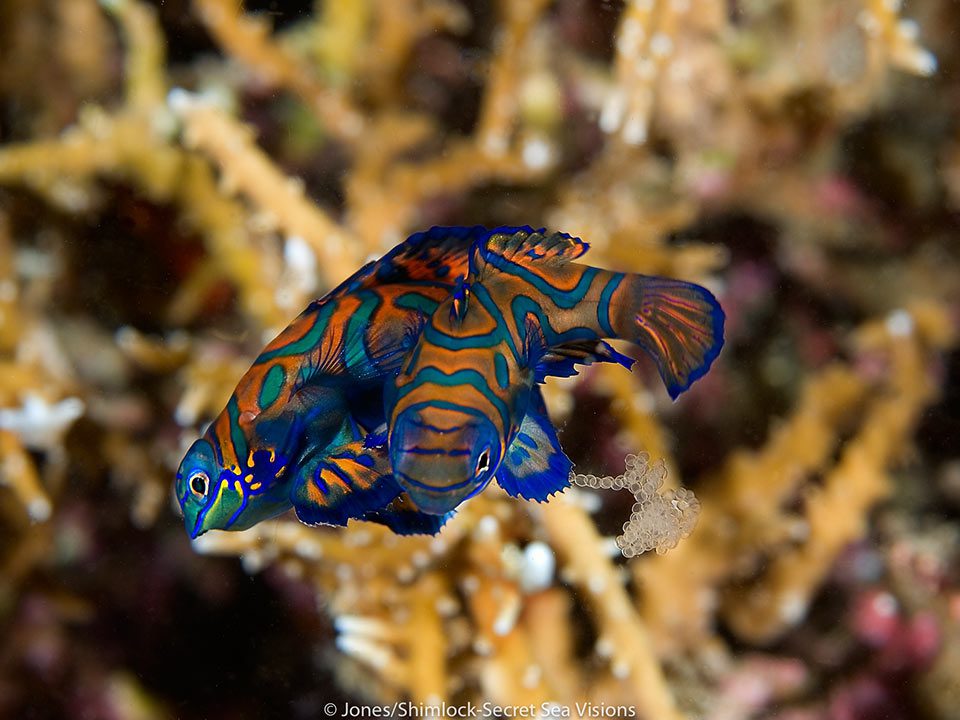 Mandarinfish: But sometimes divers in Lembeh play the voyeur role, spending an entire dive waiting for an elusive mandarinfish pair to spiral up and simultaneously release sperm and eggs. Again, the small fish is the female, and the male is the larger, cocky one, just like Mick. Besides each other, our greatest passions in life are discovering the wonders of the marine world, seeking out indigenous people and their art, and photography and writing about photojournalists to reveal the mysteries of our planet’s most remote underwater realms. Over the years we have documented the longest underwater cave in Mexico and stalked sea snakes in Borneo; we have dived with schools of hammerhead sharks; been chased by Komodo Dragons; and attacked by an orangutan.

In 2008 we began consulting with Coservation International and sustainable marine tourism initiatives in Indonesia’s West Papua province. A guide book, Diving Indonesia’s Raja Ampat (2009) was our first effort. That volume was then revised and expanded to include Triton and Cendrawasih Bays, Diving Indonesia’s Birds Head Seascape (2011). In 2014 we created and are the current administrators of the Bird’s Head Seascape website. Besides scuba diving, the site provide information about additional sustainable tourism options, local news, conversation initiatives, groundbreaking scietistific reseach, and stunning photography with the aim of conserving this region of West Papua, Indoensia’s treasure trove of biodiversity.

Please remember that our photo seminars are available on all of our trips. We focus on an often-overlooked aspect of photography: how to reveal the art in the animal. We believe we can help just about anyone, no matter what type of camera you use, to improve their skills and underwater images. See more Burt and Marine’s work here secretseavisions.com