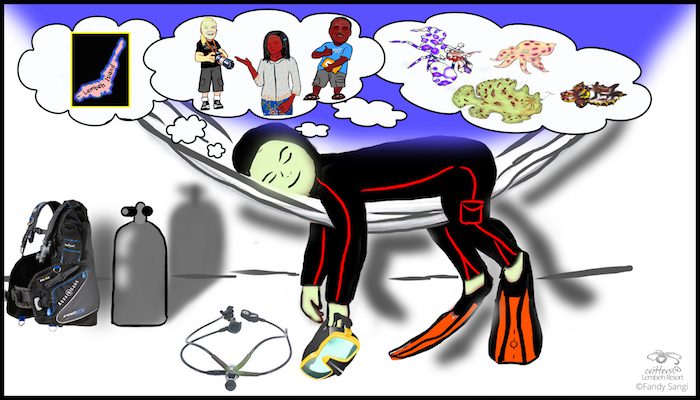 T’was The Night Before Diving

In the Lembeh Strait where crazy critters abound, every dive can feel like Christmas! But now the festive season is here we thought we would share our Christmas cheer with you all with this wonderful “Lembeh Style” Christmas poem. Which critters are you wishing for this Christmas?

T’was the night before diving and on the House Reef
Not a critter was stirring, all divers had been briefed.
The regulators were hung by the dive locker with care
In hopes that dive master Abner would soon be there.

The divers were nestled all snug in their beds
While visions of nudibranch danced in their heads
And Lovi at the front desk and cook in his cap
Had just settled down for a good nights nap.

When out on the sea there arose such a clatter
Morten sprang from his bed to see what was the matter.
Away to the window he flew like a wrasse
He tore open the french doors and threw up the sash.

The moon on the ridge of Klabat volcano aglow
Gave the lustre of mid-day to the resort down below.
When, what to Petra’s dreamy eyes should appear
But one of our tenders with eight dive guides in gear.

With one of our captains they pulled in lickety split
I knew in a moment I had to get to my kit.
Quicker than a bobbit worm they pulled in the bay
And he whistled, and shouted and called them by name!

And then, towards her locker Lauren ran for her gear
Amid the banging and shuffling of tanks, oh so near.
As I was getting on my mask and turning around
Down the pier came a diver, all excited he bound.

He was dressed in Dive Rental gear from his BC to his reg
And his clothes were all neoprene from his neck to his leg
A bundle of camera gear he carried on his back
Because the airlines over charge you for every sack!

His eyes protected by a mask and a hoodie for the water
On his feet he wore fins but for gloves he didn’t bother.
His private dive guide carried his camera with care
“Oh my goodness I hope I capture something rare”!

He spoke not a word, just submerged on the reef
And to this diver’s relief, he had paid attention to the muck brief
While watching marine life behavior he gave out a shout
My goodness, I never really realized what muck diving was about!

He turned to Dimpy with the sign low on air
After 65 minutes everyone thought seemed fair.
As they started to ascend the diver got distracted
Low and behold he saw an octopus, but it retracted!

He finished his dive and got back aboard
The hopes for his images filling his gourd
But I heard him exclaim; twas a merry retort
Happy diving to all and thanks to Critters@Lembeh Resort and Lembeh Resort!