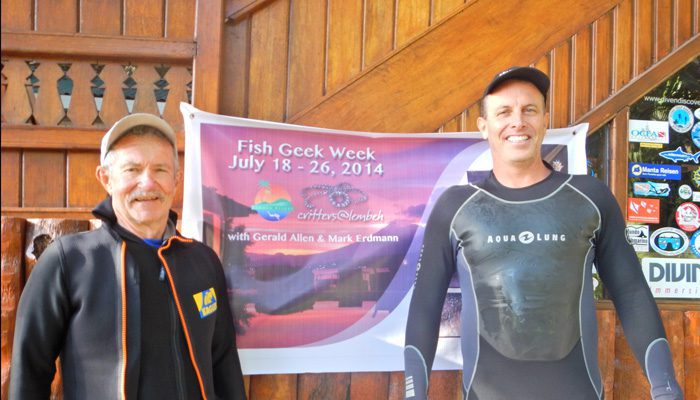 All good things must come to an end…..

We can hardly believe that it’s the last day of Fish Geek Week. We always knew Lembeh was fantastic but it’s even better than before. Since Drs. Gerry Allen and Mark Erdmann arrived they’ve counted 23 new fish species in Lembeh! They believe we also have an undescribed Cat Shark.

Throughout the week a film crew, being led by an award winning documentary filmmaker, has been working with Mark, this 2 year project will include a piece on biodiversity. This is a subject in which Mark, recently promoted V.P. of Conservation International, is a recognized expert.

The week ended with seminars on Coral Reef Fish, Manta Rays and Marks discovery and conservation efforts of the Coelacanth. Recently discovered by Mark in a fish market in Manado in 1997, his 10 month search for a live one produced positive results when it was discovered that this 400 million year old fish had evolved and the species we have today in North Sulawesi is new to science.

Our last night included a pre-dinner slide show with pictures taken by Gerry and Mark of their discoveries this week. Those of us attending were lucky enough to see pictures of fish that have yet to be described. Over all Fish Geek Week was a smashing success!

In addition to your “wish list” dive guides at [email protected] are on the lookout and ready to show you a few of the  special fish found here in Lembeh.