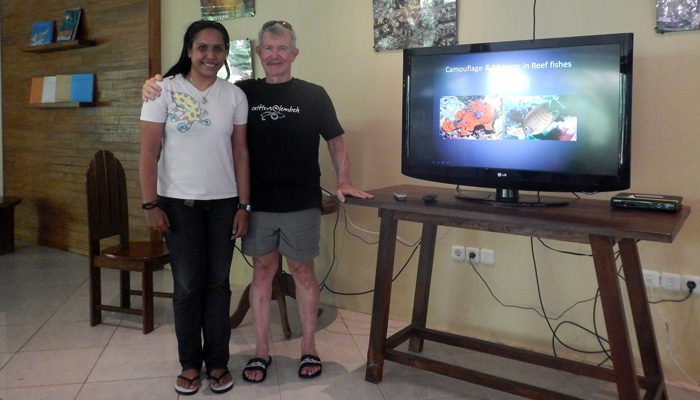 We’re starting to notice some serious “geeking” going on. It’s great when you hear “Hmmm I’ve never noticed that before” and “I’ll have to pay closer attention next time”. It’s always interesting to view guests photos after returning from a dive, really see what they’re seeing and how they see it. It’s funny because we are noticing more fish species in photos, not only species, but shots of fish behavior as well.  Gerry’s ecstatic to see this catching on, one of his main goals was to educate and inspire divers to take more notice of fish species. As you can imagine, after diving for as long as and as many places as he has, stories and fun facts are abundant in his seminars.

It’s been interesting to hear some of the telltale signs that designate a fish, all gobies have a disk like shaped pelvic fin? It’s been fused together, instead of two pelvic fins on the lower bottom, like most fish, nearly all gobies have one. On the other hand, some fish are very difficult to put in a species, like the beautiful male Flasher Wrasse who displays its colors each evening about an hour prior to sunset to attract the ladies for mating. When Flasher Wrasses spawn they release eggs and larvae to drift freely in the water to fertilize.  Sometimes various Wrasses “spawn” gets mixed up when fertilizing and viola you have a new type of Flasher Wrasse, WRONG!  Actually, you only have a hybrid and they usually can’t have “offspring”.

North Sulawesi and Lembeh in particular is a hotspot for endemic fish. At last count there were 14 endemic species for North Sulawesi and 9 in Lembeh. Anyone who’s been to Lembeh can tell you that there are 1000’s of Banggai Cardinal Fish here, in the mid 90’s you wouldn’t have seen any, none, zip, nada! These fish were endemic to the Banggai Islands 100 of miles from here, but they were so popular with the aquarium trade in the 90’s (an estimated 110,000 Banggai per month were sent to traders) that collectors got the bright idea to bring them to Lembeh, closer to the port, for easier capture and shipping.

With research comes a price and in 2007 Conservation International had the Blue Auction to help fund ongoing research. As a joke, one of the team mentioned auctioning off the naming rights to new endemic fish, which have been found in the Coral Triangle. Christie’s Auctions and Prince Albert of Monaco thought it was a fantastic idea and flew Gerry and Mark to Monaco for the auction. These were some lucky species, prices started at $45,000 and the highest went to a walking shark for $500,000…just to be able to name them!  The Grand Prize – all expense paid trip on a research to Raja Ampat! O.K. maybe after you bid 1000’s of dollars you can’t really call it all expenses paid.

Here at the Lembeh Resort House Reef we too are trying to help our fish friends in the form of Bio Rocks, lava rocks and other habitats we are building to promote fish life. Our in house Marine Biologist “Dimpy Jacobs” is especially excited about a series of nets draped to hang just off the bottom, soft corals and sponges seemed to like latching on to the rope and the fish love the overhead cover. The House Reef is a perfect spot to go out and watch Flasher Wrasses just before sunset, finish your dive with an assortment of critters.

Lembeh is famous for its camouflage critters and mimicry. A short presentation today from Gerry explaining what types of camouflage are used and why they mimic other animals was fascinating. Fish mimicking poisonous or unsavory fish to keep safe, fish mimicking coral to blend in and that little wolf in sheep’s clothing who mimics fish to get in the group and eat them!

As mentioned, stories are abundant, but knowledge is power and with 14 endemic fish to North Sulawesi and 9 in Lembeh, our dive guides are learning which ones to stay on the lookout for.  Looking forward to the rest of the week – stay tuned.