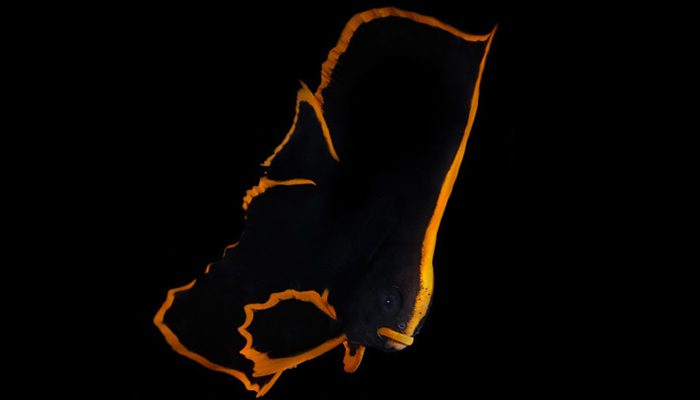 Juveniles With a Difference

Here in Lembeh we are frequently asked to identify “new” species – something a diver has never seen before and they are often surprised when we tell them the name of a species they thought they already knew. This is because in some species the changes that occur between the juvenile stage and the adult form are so radical that the juveniles are completely unrecognizable when compared to how they become later in life. Some fish will not only change size, shape, color and markings but also gender!

Here are some species that undergo phenomenal and intriguing changes as they develop. How many of these do you recognise? 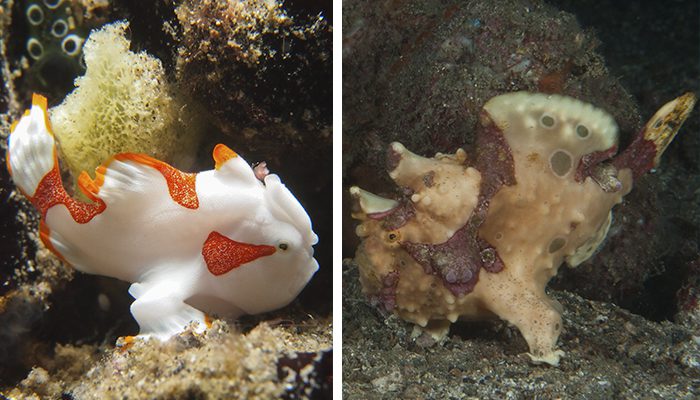 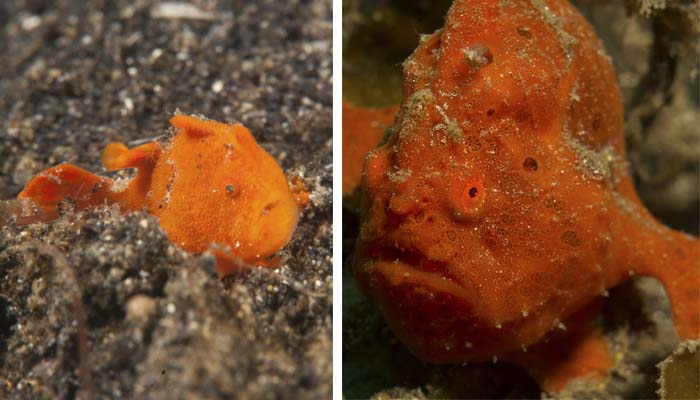 Another frogfish species which transforms with age is the painted frogfish (Antennarius pictus). This jazzy juvenile has ornate markings which include orange scattered spots on a black body with blue fin borders. As the juvenile enters adulthood it loses its orange spots and takes on a solid coloration which changes through phases of red, bluish grey, black, yellow, orange, pink and brown. The yellow boxfish (Ostracion cubicus) is not the most beautiful fish on the reef with its brownish to silvery color and docile nature, yet as a vivid yellow and “dice-like” active juvenile it is a sought after subject for underwater photographers. 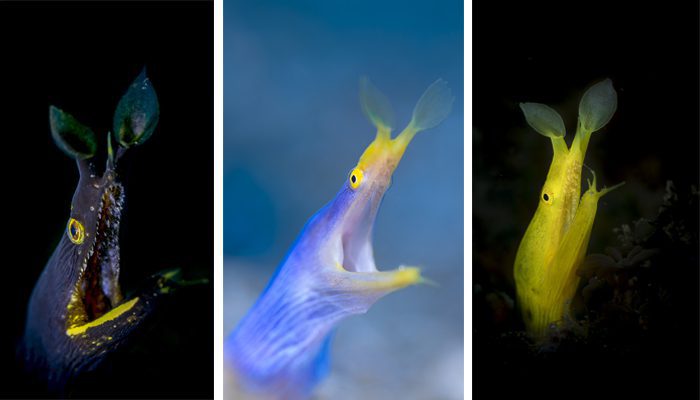 Black ribbon eels (Rhinomuraena quaesita) are not considered to be as photogenic as their bright blue and yellow counterparts but did you know that they are the same species? The black ribbon eel is the juvenile male. As the eel matures it changes to the blue form and becomes an adult male and later changes again to yellow and becomes female. 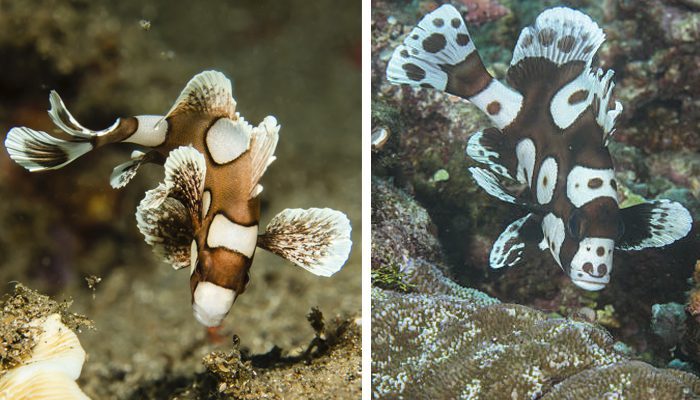 One sought after, and extremely tricky, juvenile to capture images of is the harlequin sweetlips (also known as the “many spotted sweetlips – Plectorhinchus chaetodonoides). This extremely active and beautiful juvenile never stays still and is extremely camera shy unlike its less active and less eye catching adult form. 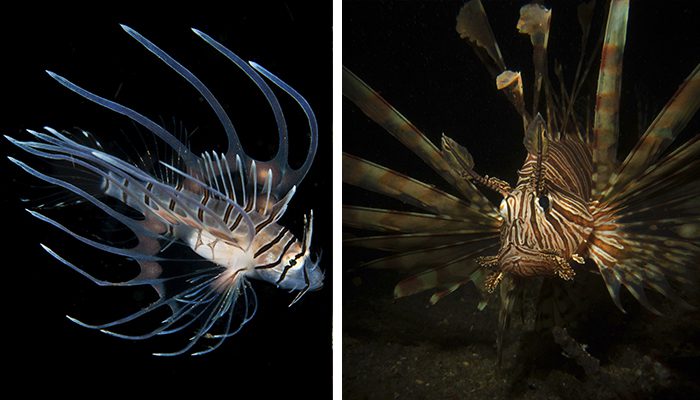 The common lionfish also known as the red lionfish (Pterois volitans) is not red at all when it starts out in life. The juvenile form of this species has a tiny translucent body with narrow black bands and as they mature the bands widen and develop their reddish hue. 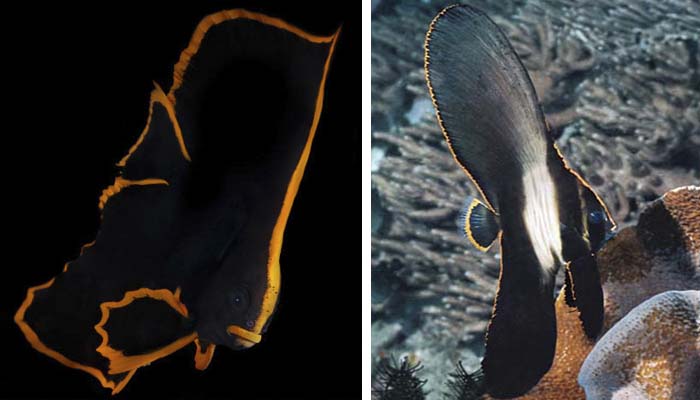 Pinnate spadefish (Platax pinnatus), also known as pinnate batfish, are exceptionally photogenic as juveniles with their black bodies being bordered by a contrasting bright orange margin. As this species matures the only hint of its previous juvenile form is in the black vertical bands on its silvery body and the black edging on its tail and fins. 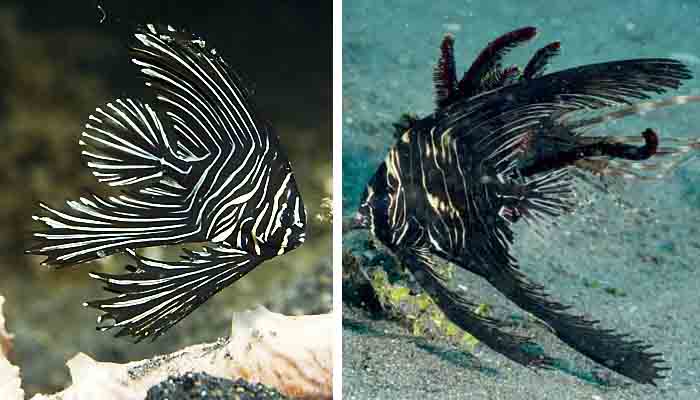 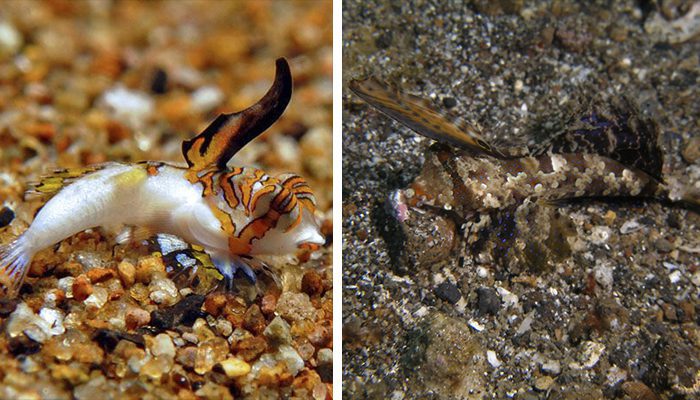 These are just nine species which we see regularly here in the Lembeh Strait – how many of these did you already know? There are many other species which undergo phenomenal changes in appearance as they mature, what are some of your favourites?

The Lembeh Strait is bordered by stunning mangrove forests which provide habitat for numerous species of shy and vulnerable juveniles. The mangroves provide juveniles with safety, shelter and plenty of food before they mature and transition into the Strait. 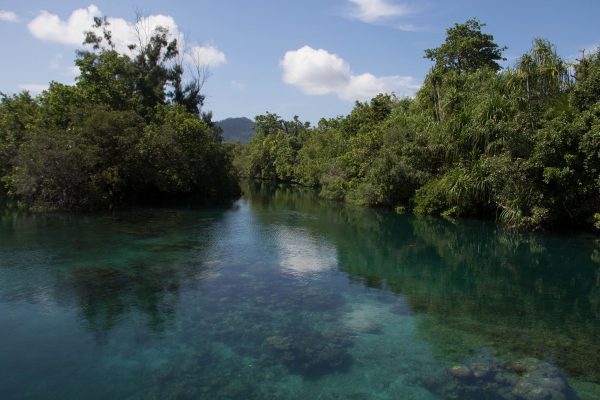 Would you like to see some of these rare and unique juveniles here in Lembeh? Join us at Lembeh resort and enjoy small groups and an exclusive experience on some of the best dive sites in Indonesia. For underwater photographers we are the only dive resort in Lembeh to have photography trained Dive Guides, a designated camera room, a full service Photo Center and an onsite full-time Photo Pro to give you guidance and assistance. To join us or to make an enquiry: [email protected]

We look forward to welcoming you to North Sulawesi soon.