Frogfish of the Lembeh Strait, Indonesia

What’s Not To Love About A Frogfish?

Divers and underwater photographers love frogfish, but what is it about these critters that keeps so many of us so captivated? Certainly not their charming good looks! Part of the thrill of frogfish is certainly in the hunt – these masters of camouflage give us a sense of accomplishment merely by being detected. And then there’s their irresistible habit of walking, rather than swimming, their use of jet propulsion, and the fact that they fish – with a rod, all have a certain appeal. Frogfish are not by any means cute and cuddly, they are in fact, one of the grumpiest looking of all marine species but somehow, as we watch them devour an entire fish whole, we find ourselves awarding them even more kudos in our minds!

We are extremely spoilt by the number of frogfish in Lembeh that inhabit our dive sites – and they truly do come in all shapes, sizes, and colors, across 9 different species. When it comes to frogfish in Lembeh, this is one of the only places on earth where you can see them in such abundance and in such a diverse range of species. Let’s take a closer look at the different species we see and how to tell them apart…

When you see a hairy species it’s usually impossible to mistake it for any other but not all individuals are as hairy as each other. The “hair” on this species is actually numerous thin skin appendages that give the appearance of hair. The density of appendages varies according to the individual. The most common color variations are green – brown so they look like algae, but when they are found living near sponges they can be bright yellow or orange and usually with less hair so they look more like the sponges themselves. The lure of the hairy is one of the largest and most visible; it is made up of between 2 to 7 thick worm-like appendages. The hairy species is also known as the “striated” frogfish.

This species is identifiable by the dark spots or rings which cover its body. It’s a medium sized frogfish growing up to around 21cm and its coloration is highly variable from bright orange, bluish grey, yellow, green, mottled brown and purple, pink, brown, black and white. Painted frogfishes have a long, thin rod with a translucent lure resembling a small crustacean.

Unlike mature painted frogfishes, juveniles are highly recognizable by their coloration which is a black body with scattered bright orange spots and ornate blue fin borders.

Unsurprisingly, the giant frogfish is the largest species and it can grow up to 45cm. No other frogfish reaches this size – but it doesn’t actually make it any easier to spot! The giant frogfish displays a variety of color phases according to their habitat to ensure they remain undetected on the reef. Color phases include white, yellow, tan or brown, orange, pink, red, green and black. Unlike other species their skin is smooth, although some individuals may have a few warty projections. The giant’s rod is very thin and the lure below is white and bushy, made up from numerous small filaments. Did you know that each individual species of frogfish has a different ‘style’ lure which mimics different ‘bait’?

Identifying the warty frogfish is relatively easy – it’s warty! This species’s body is covered in wart-like bumps as well as scab-like red patches – which tend to be on the side of the head, top of the dorsal fin and at the base and tip of the tail fin. The most common color variations are yellow and white but they can also be pink, red and shades of brown and black. This is a small species that grows up to 11cm. The warty’s lure looks like a small shrimp or fish and is brown with white details. The rod is very long, thin and translucent.

The clown variation is not an individual species – it’s actually a juvenile warty. Clown frogfish are often just a couple of cm’s or even less and if you look carefully at the red/orange patches on their bodies you’ll find that they are in the same places as the red patches on the adult warty frogfish (see pictures above).

The esca (lure) of the freckled frogfish resembles a small tuft, sometimes with dark swellings at the base. Like most frogfish species, the freckled can change color to adapt to its surroundings. The most common colorations include yellow, red, purple, brown, and tan. The name ‘freckled’ comes from this species sometimes having a mottled appearance and, in some individuals, a peppering of dark spots or bands.

This small species grows to just 5cm and is easily recognizable by the large pale to orange edged, blackened spot covering the base of the rear dorsal fin and back. The ocellated frogfish is a solitary species which we spot on sand and rubble patches – it’s one of the rarer species that we see here in the Lembeh Strait so a sighting is always a treat!

This species grows to just under 5cm and is identifiable by the small to large white spots which appear generally behind the eye and above the pectoral fin and on the upper edge of the tail fin. Color variations are more limited in this species with the common shades being yellow to red, brown and black – matched accordingly to their surroundings. Another distinguishing feature is their long, claw like pectoral fins and their short rod with a split filamented lure.

This is a rare species which takes its name from the sargassum seaweed which it inhabits. Sightings of this frogfish in Lembeh can be close to shore or out in the open ocean at the either end of the Strait, as it will float with the seaweed. It’s distinguishing characteristic is its large pectoral fins with claw-like tips and it has lots of leafy appendages. The sargassum is mottled with darker lines on the fins and usual color variations include cream, beige, brown and green.

The hispid frogfish is often mistaken for the hairy frogfish in Lembeh because it also has skin appendages covering its body. Unlike the hairy, the hispid’s apendages are short, which has led to its other common name, the ‘shaggy frogfish’.  The hairy frogfish also has a large and very distinctive, worm-like lure, whereas the lure of the hispid frogfish resembles a pom pom (see picture below, taken by in-house Marine Biologist Agus Peloa). Another distinctive characteristic of the hispid are its roughly parallel dark stripes. The stripes around the eye are often in a sunburst pattern with the eye being at the center. The hispid does not have stripes on its belly.

Dive and Stay at Lembeh Resort

Are you ready to dive into Lembeh? Stay at Lembeh Resort and enjoy the wonders of the Strait in comfortable accommodation with a touch of luxury. Our secluded location on Lembeh Island, combined with our exclusive service and exquisite dining make Lembeh Resort a wonderful home away from home in North Sulawesi.

Our professional dive guides are marine biology and underwater photography trained (and PADI or SSI certified), and we are the only dive resort in Lembeh with on-site marine biologists, photo pro and Backscatter Authorized Photo Center.

For more information, or to make a reservation contact us at: reservations@LembehResort.com 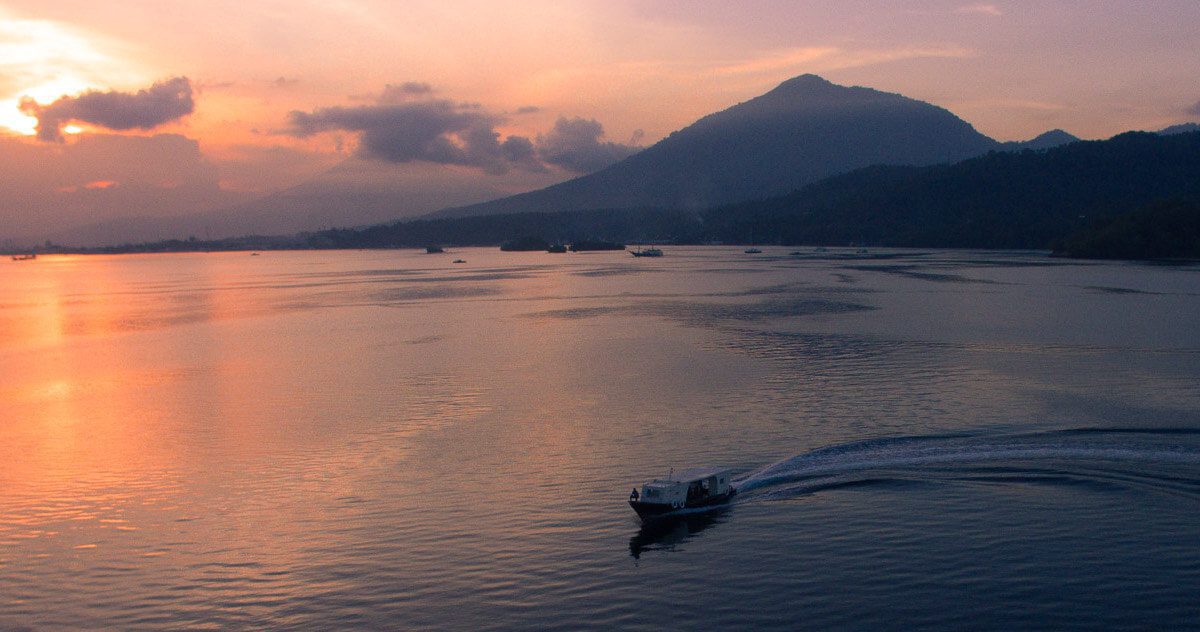