Are you planning to head to the Lembeh Strait for your next diving holiday? Are you looking forward to the rare and unusual marine life which resides there?
The Lembeh Strait is home to a host of critters which live on it’s black sand slopes and are often found hiding in plain sight. Diving in Lembeh is a muck diving bonanza with abundant species on every single dive. If you are an underwater photographer, make sure your batteries are charged as there will be no shortage of critters and photography opportunities.
In keeping with Halloween, this week we are sharing some of the most ghoulish and weird critters that we find everyday in Lembeh – welcome to our underwater world! 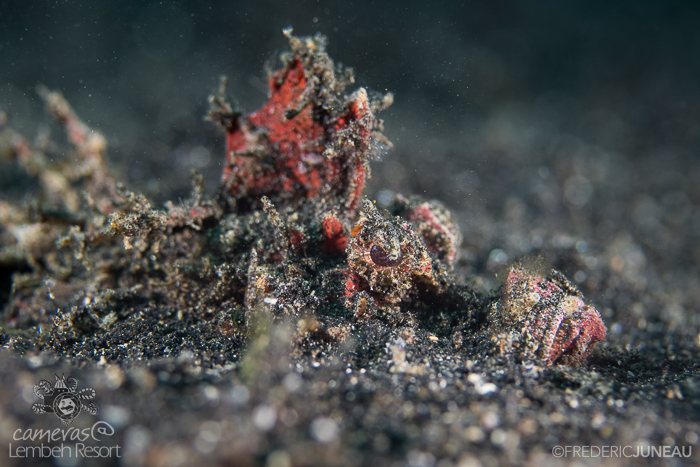 This spooky looking critter is known by several common names including the Demon Stinger, Indian Walkman, Devil Stinger Fish and the Bearded Ghoul. The Demon Stinger is a member of the Imicus genus of venomous fishes, closely related to the true stonefishes. It is irregularly surfaced with a knobby appearance and it has numerous venomous spines to ward off enemies.

This species grows up to 26cm and is red or sandy yellow with light blotches, and very similar to that of the surrounding sandy or coral seabed in which they are found. This coloration acts as a camouflage which renders them extremely difficult to detect in their natural habitat. The skin is without scales except along the lateral line, and is covered with venomous spines and wart-like glands which give it a knobby appearance. The head is flattened, depressed and concave. The eyes, mouth and nostrils project upwards and outwards from the dorsal aspect of the head.

The Demon Stinger is nocturnal and typically lies partially buried on the sea floor or on a coral head during the day, covering itself with sand and other debris to further camouflage itself. Due to the fact that this species lives a fairly sedentary life, mostly buried in sand it will often become riddled with parasites, algae and crustaceans due to the amount of time spent motionless waiting for prey. Fortunately for the Demon Stinger this isn’t much of a problem as it has the ability to shed its outer layer, effectively getting rid of any unwanted passengers!

When disturbed by a diver or a potential predator, the Demon Stinger fans out its brilliantly colored pectoral and caudal fins as a warning. Once dug in, it is very reluctant to leave its hiding place. When it does move, it displays an unusual way of moving, it crawls slowly along the seabed, employing the four lower rays (two on each side) of its pectoral fins as legs. When disturbed they raise the spines along their backs and will usually move off out of harms way, however, if cornered they are able to charge at considerable speed. 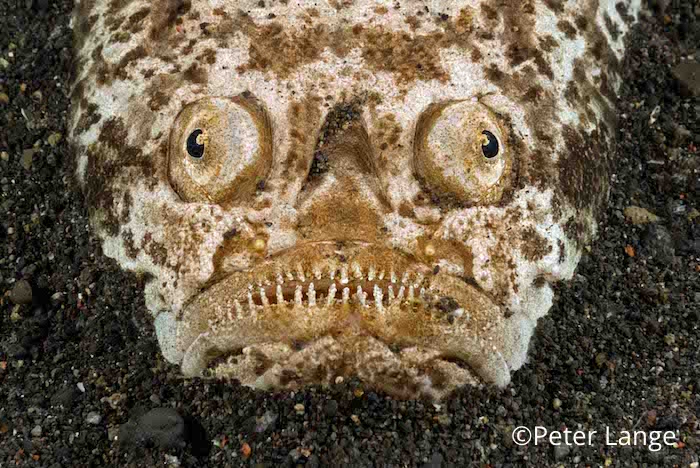 Stargazers are one of our favorite species to see on night dives. These are one of the most unique (and ugly) looking inhabitants of the Lembeh Strait. Stargazers are found hiding in the sand in which they are partially covered. They have top mounted eyes which peer out at you and they have a large, upward-facing mouth in a large head. Their usual habit is to bury themselves in sand, and leap upwards to ambush prey  that pass overhead.
Stargazers are venomous; they have two large venomous spines situated behind their opercles and above their pectoral fins. Did you know that stargazers are a delicacy in some cultures (the venom is not poisonous when eaten)?  Because stargazers are ambush predators which camouflage themselves and some can deliver both venom and electric shocks, they have been called “the meanest things in creation”.  In North Sulawesi the fish is often locally known as the mother-in-law fish. 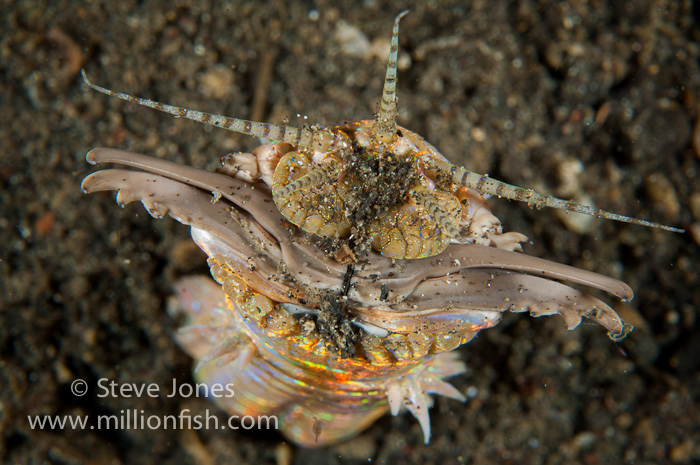 The Bobbit worm is one of our most formidable critters – this nocturnal species is one of Lembeh’s highlights. The Bobbit worm buries its body into the black sand where it lays in wait for prey. Armed with sharp teeth, it is known to attack with such speed and ferocity that its prey is sometimes sliced in half.

Eunicids inject a toxin into their prey, which stuns or kills it, such that prey much larger than the worm itself can be eaten and digested. The “Coral Reefs” episode of Blue Planet II shows that the Bobbit worm is capable of killing fish that are formidable predators in their own right, such as lionfish. 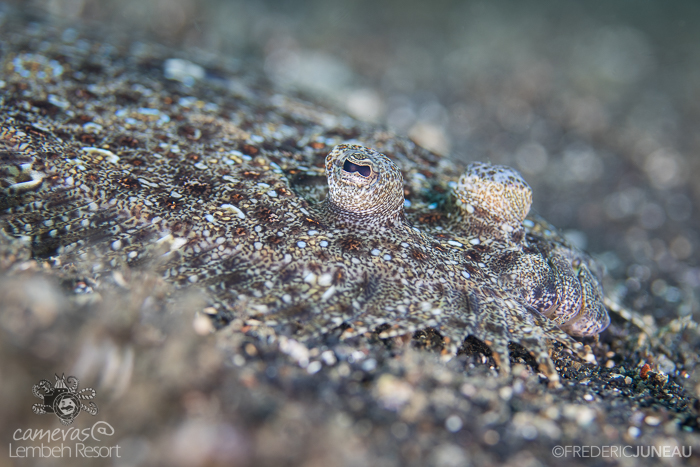 Also known as the flowery flounder, this is a species of fish in the family Bothidae (lefteye flounders). The species is found widely in relatively shallow waters in the Indo–Pacific, also ranging into warmer parts of the east Pacific.

The peacock flounder is also called flowery flounder because it is covered in superficially flower-like bluish spots. As suggested by the family name, lefteye flounders have both eyes on top of the left hand side of their heads. The eyes are raised up on short stumps like radar dishes, and can move in any direction independent of each other. That feature provides flounders with a wide range of view. One eye can look forward while the other looks backward at the same time. The baby flounders have one eye on each side of their bodies like ordinary fish, and swim like other fishes do, but later on, as they are becoming adult, the right eye moves to the left side, and flounders start to swim sideways, which gives them the ability to settle down flat on the bottom. The maximum length of this flounder is about 45 centimetres (18 in). 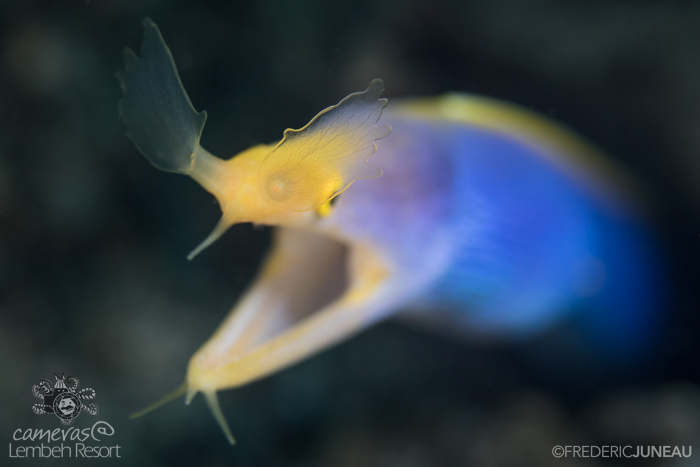 This species is also known as the  leaf-nosed moray eel or bernis eel, and is a species of moray eel, the only member of the genus Rhinomuraena. What is now known as R. quaesita also includes the former R. amboinensis. R. quaesita was used for blue ribbon eels and R. amboinensis for black ribbon eels, but these are now recognized as the same species. The ribbon eel is found all around Lembeh including our House Reef.

The ribbon eel is a creature bearing a resemblance to a mythical Chinese dragon with a long, thin body and high dorsal fins. The ribbon eel can easily be recognised by its expanded anterior nostrils. Based on observed colour changes, it is generally considered a protandric hermaphrodite (first male, then changing sex to female). The ribbon eel starts out at non-sexual and all black before changing to blue and yellow and becoming male. It later changes to all yellow and female. Spooky? Yes!

We hope that these spooky critters will entice you to join us in Lembeh where the weird is definitely wonderful!
To find out more, please contact us on reservations@lembehresort.com
We look forward to welcoming you to Lembeh Resort soon