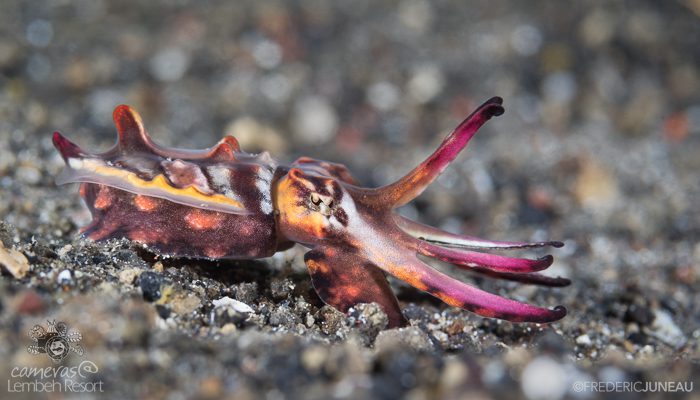 Cephalopods of the Lembeh Strait

Do you know exactly what a cephalopod is? Does the term cover everything with arms and tentacles? The name cephalopod is derived from Greek with “Cephalo” meaning head and “Pod” meaning foot. This is because all cephalopods have large heads which house their brains and organs and it is connected directly to their feet (known now as arms / tentacles). Technically there are 4 groups of cephalopods: octopus, squid, cuttlefish and nautilus. With the exception of nautilus, cephalopods are in no short supply in Lembeh and they are incredible critters for watching unique behavior and capturing stunning images!

Read on to learn more about a few of our favorite cephalopod critters which we find when diving in Lembeh.

This colorful little critter is a firm favorite with muck diving underwater photographers here in Lembeh. When agitated the aptly named flamboyant will flash from bright purple to red, to orange, to bright white in a matter of seconds. 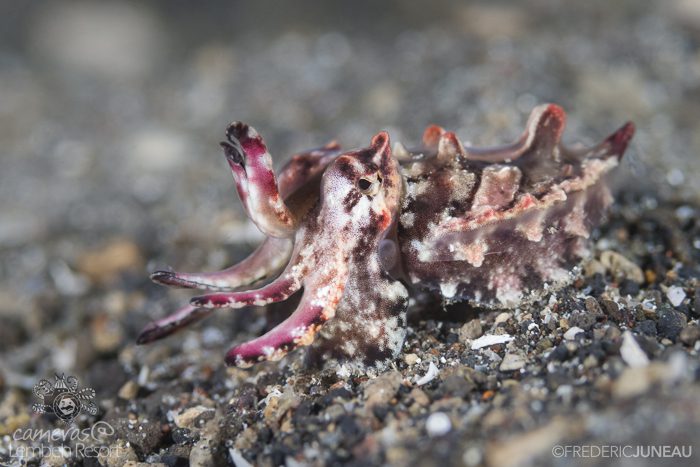 Flamboyant cuttlefish also have a distinctive method of getting around. Unlike other cuttlefish they will use their lower arms to walk along the sea floor while at the same time flashing hypnotic bands of color to ward off any approaching predators.

When the flamboyant is in a relaxed state it is a dark brown color and as a small species (up to 12cm, but usually between 5 – 8cm) they are tricky to spot. This species is active during the day when they are hunting for small fish and crustaceans. 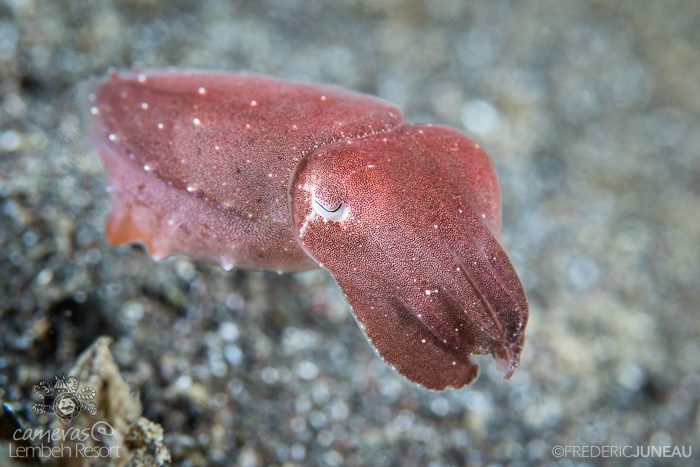 This is the largest species of cuttlefish which we see in the Strait and although it doesn’t flash vivid colors like the flamboyant, it still puts on an impressive display. This relatively common species lives in depths that range from shallow reef tops up to 30 meters. The broad club can grow up to 50cm in length and can weigh up to 10 kilograms!

The broadclub is an excellent videography subject, particularly when it is stretching out its tentacles, feeding, mating or depositing eggs. This species preys on crustaceans and fish using a unique cephalopod hunting technique. Bret explained that cuttlefish flash their colors in a hypnotic rhythmic pattern to draw the attention of their prey away from the imminent danger they are in!

Did you know that there is more than one species of blue ring octopus? It’s true! Scientists have now noticed differences among blue ring octopus and here in Lembeh we have found two distinct species of these little guys. The blue ring might be small but don’t be deceived as they are recognized as one of the world’s most venomous marine animals. 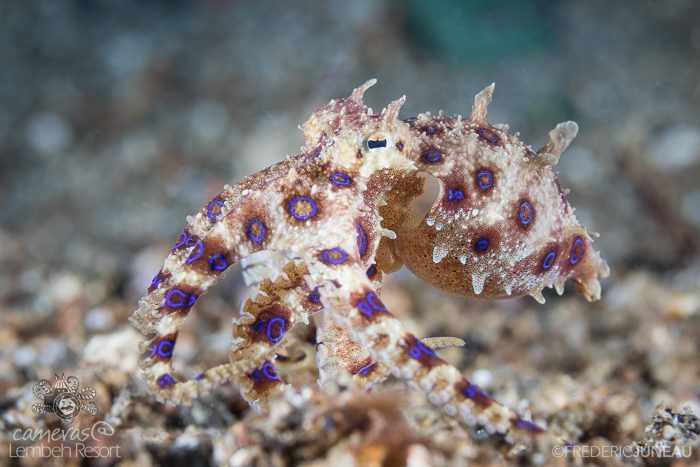 Blue ring octopus in Lembeh measure just 4 to 8 cm (1.5 to 3 in) and despite their relatively docile nature they can be incredibly dangerous (even deadly) to humans if provoked. They can be identified by their characteristic blue and black rings and brown to yellowish skin. When the octopus is agitated the brown patches darken and iridescent blue rings appear and pulsate. Blue ring octopus are hunters which feed mainly on small crabs including hermit crabs and shrimp. The best dive sites in Lembeh for finding blue rings are Sarena Besar, Pintu Colada, Critter Hunt, and Nudi Falls.

When it comes to the most intelligent species of octopus, the coconut octopus is a serious contender. Also referred to as the veined octopus, it has a sturdy looking brown body detailed with fine darker lines. It is one of the smaller octopus species with arms growing up to 30cm. Coconut octopus change color to match the shade of the sand they live on but become darker to almost black if agitated and their suckers develop a slight bluish tinge. 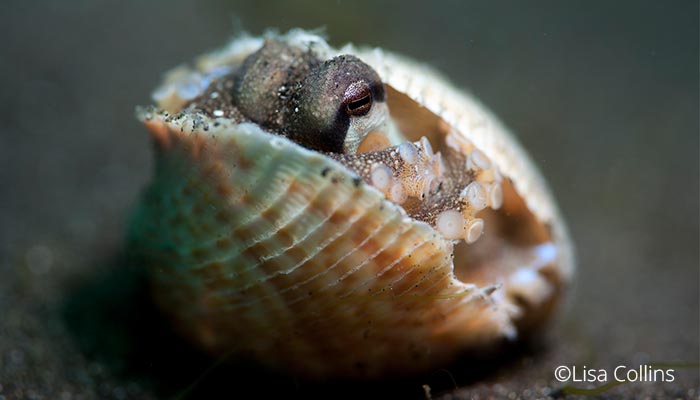 Coconut octopus are one of our favorite species to watch when it comes to behavior. They take shelter in bi-valve shells which they close up on themselves using their suckered tentacles. When they can’t find shells they will readily use coconut husks which is where their name comes from. Coconut octopus will often “pick up” their shells and carry them under their mantles which walking on their tentacles!

This is one of our favorite Lembeh Strait nocturnal critters. It’s a rare find but one that we spot on night dives when they are out hunting. The starry night octopus catches its prey with its tentacles and it has a strong beak which quickly paralyses its victim – usually small shrimps, fish, crustaceans and even other octopus.

It can be found on sandy and rubble areas, areas with a seaweed cover or on rocky and coral reefs. It has a reddish brown colour and when agitated, white star-like spots appear all over its body which is its only possible colour change and where its name comes from.

Starry night octopus have a body size of up to 13 cm and arms of up to 80 cm. 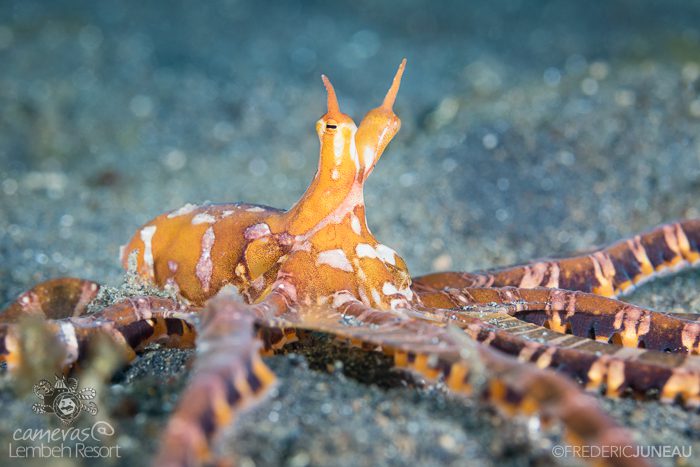 Wunderpus octopus are commonly confused with the mimic octopus

The wunderpus is one of the most recently discovered species of octopus here in Lembeh. It is often confused with the mimic octopus but it is smaller, the color of it’s stripes is clearer, it’s eye stalk are much longer and unlike the mimic it doesn’t have a white margin on the edges of its tentacles.

Wunderpus are usually solitary and they burrow in the sand at shallow depths. We usually spot this species in the afternoons when they are foraging for small fish and crustaceans.

Bigfin reef squids are characterized by a large oval fin that extends throughout the margins of its mantle, giving them a superficial similarity to cuttlefish. Bigfin reef fish are known to follow night divers in the Strait and take advantage of their night lights illuminating crustaceans and small fish. Bigfin reef squids have the fastest recorded growth rates of any large marine invertebrate, which is necessary as they are an extremely short-lived species, with a maximum recorded lifespan of just 315 days. 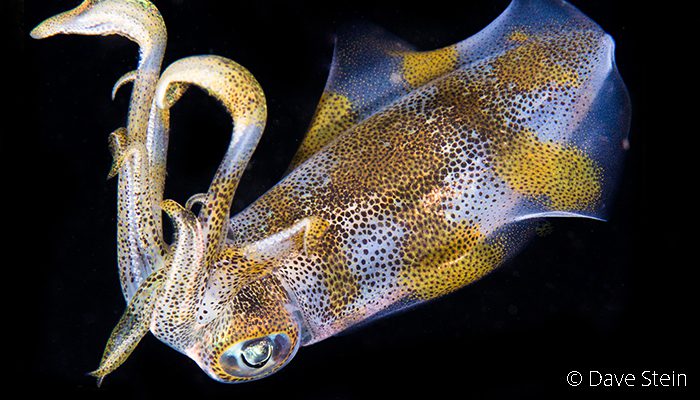 From one of the largest squid species to the smallest known species! The pygmy squid measure up to a tiny 1.5cm and they have a unique organ on their mantle which helps them to attach to sea grass and other debris. Sea grass is their primary habitat as they lay their eggs on the underside of the leaves. The pygmy squid feeds on crustaceans including amphipods which can be as large as themselves. 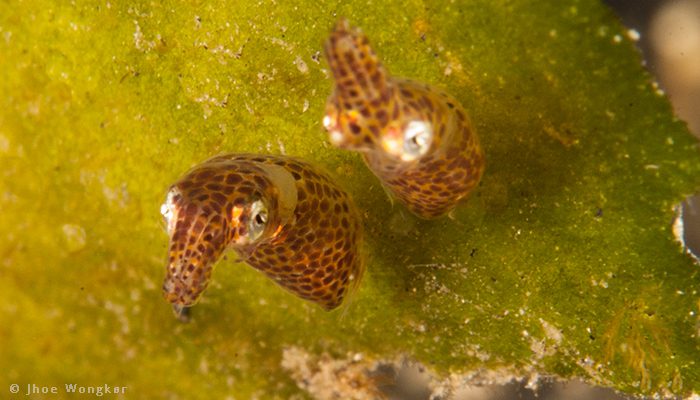 These are only a small selection of the cephalopods which we see here in the Lembeh Strait – there are many more which we find on a regular basis at our muck diving sites as well as at our stunning coral reef dive sites. If you’d like to find out more about the critters of Lembeh, why not try using our Critter Log? 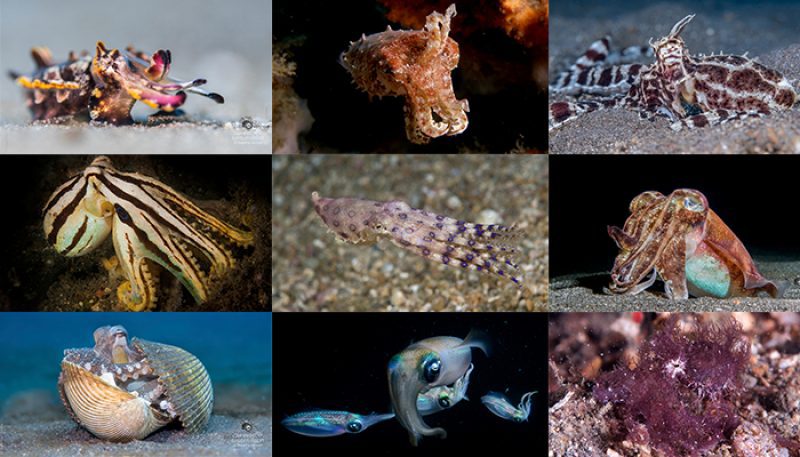 A selection of some of our favorite cephalopods in Lembeh

Are you a fan of cephalopods? There is no better place to discover and observe these intriguing marine critters than right here in the Lembeh Strait. If you’d like to join us at our luxury dive resort, contact us for more information: reservations@LembehResort.com

We look forward to diving in Lembeh with you soon.