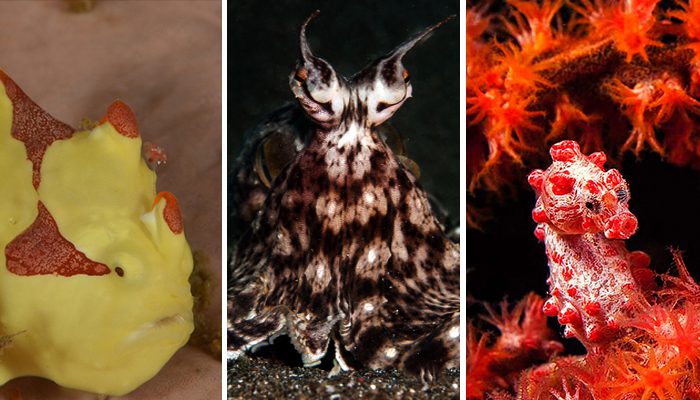 Critters that Fool All Year Around

April may be the month of the fool but in Lembeh we have many critters that are constantly fooling other marine life through mimicry and camouflage – occasionally they even fool us too! These are our top 5 “foolers” from the Lembeh Strait and some interesting facts which may surprise you…

The master of mimicry! The mimic octopus takes its name from its ability to mimic other sea creatures, most notably lionfish, flounders, sea snakes and jellyfish. Mimic octopus’ arms grow up to 30cm long and have a two-tone pattern of white banding on a dark brown background which will lighten or darken when it is distressed. Mimics are active during the day time but can be difficult to spot as they are often in the sand with only their head protruding. Mimic octopus are often confused with wunderpus octopus which are more of a reddish brown color, have elongated eye stalks and lack the white line which the mimic has bordering each of its arms.

Did you know that the mimic octopus was discovered here in Sulawesi in 1998? 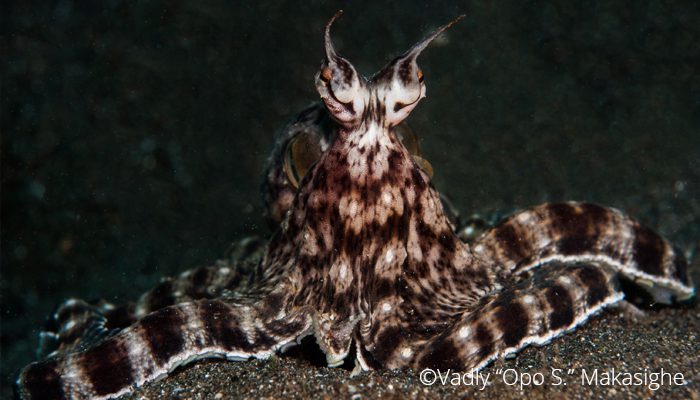 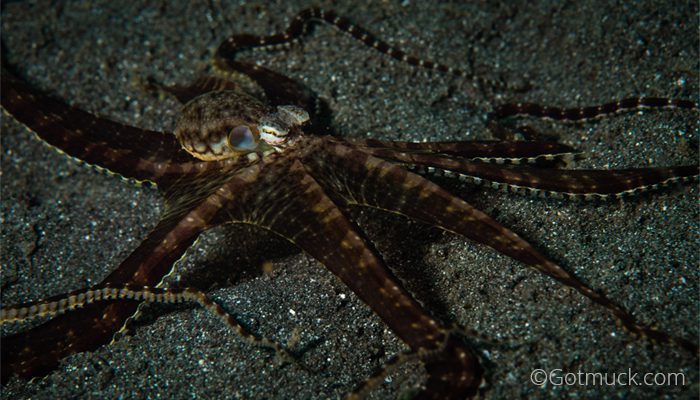 Imagine the surprise of scientist Georges Bargibant when in 1969 as he was about to dissect a Muricella gorgonian fan in his laboratory he discovered a pair of tiny seahorses staring back at him. This was the first species of pygmy seahorse ever to be discovered and the following year the species was named officially by Whitely as Bargibant’s pygmy seahorse. These masters of foolery are so cleverly disguised that they are extremely difficult to spot. They only grow to 2.7cm and they cleverly eat from the gorgonian on which they live which causes them to develop “tubercles” which are the wart like lumps the same as which grow on the fan and completes their camouflage. There is no fooling this little hippocampus! 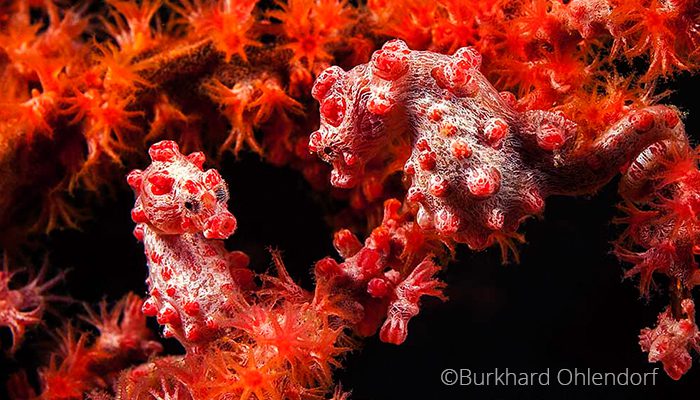 This cryptic critter fools predators (and divers) in to believing it is nothing more than an innocent piece of drifting sea grass. With color variations which range from red, green, purplish, yellow or brown and with darker mottling it is perfectly matched to be any age of sea grass, fresh or decaying. Its flat leaf like body and short paddle-like tail add to the camouflage and make even its movements a perfect fit too. In Lembeh we find robust ghost pipefish in shallower waters and it is often spotted in pairs so if you see one, don’t be fooled into thinking it’s alone! 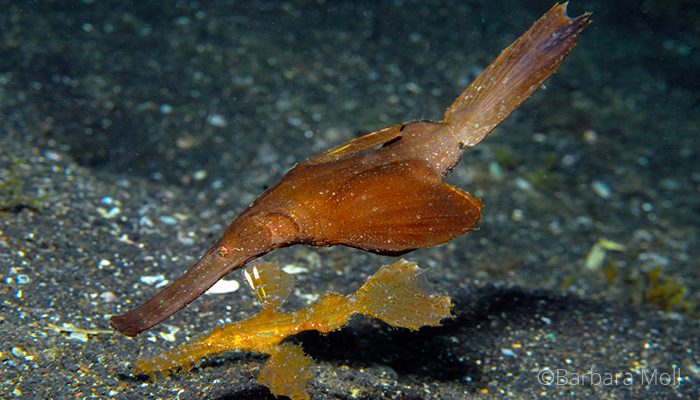 This small critter grows to only 4 cm across its carapace which, along with its legs, is thickly covered in fine hairs to which it can easily attach soft corals and hydroids in an attempt to blend in completely with its surrounding environment. This clever critter fools its predators in to believing it is just part of the scenery and if it moves to a different area it will attach new species to itself once again – it’s a cunning technique which ensures it stays safe. There are several different species of spider crabs and they can be difficult to identify apart from each other as they are often so well hidden under their “decorations”. 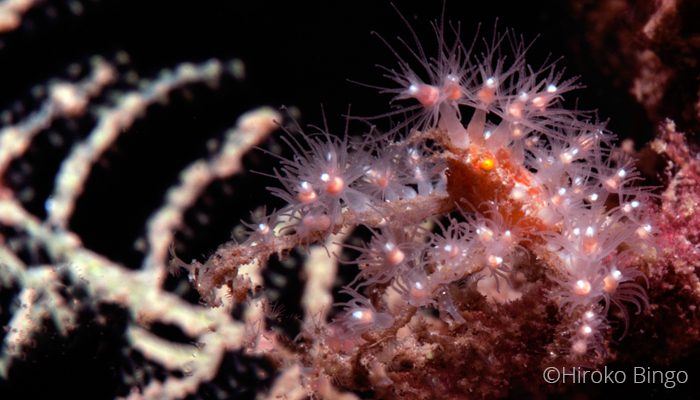 There are several color variations of the warty frogfish but the most frequently seen in Lembeh is predominantly yellow with reddish brown patches and numerous knob-like warts all over the body. This frogfish is nobody’s fool and it knows that if it sits among algae, sponges or soft corals its camouflage will be most effective. The warty camouflage not only keeps this species of frogfish safe predators but also keeps it hidden from unsuspecting pray that that are enticed to within striking distance by its lure – more fool them! 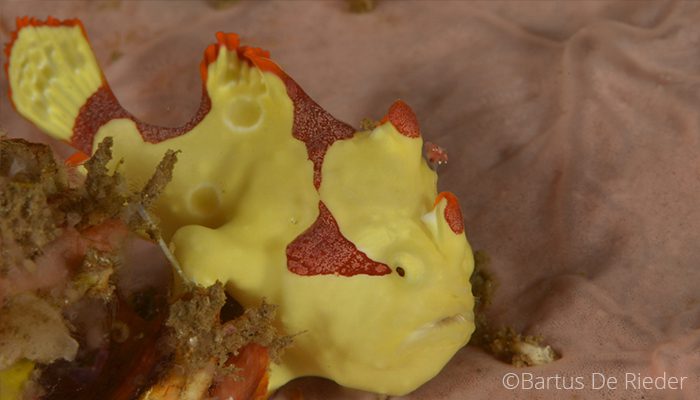 These are just 5 of the many rare and unusual critters that reside in the Lembeh Strait which has been at the center of many modern marine life discoveries since diving began here. We are extremely proud to have what is known as the “best muck diving in the world” and many of Indonesia’s most famous dive sites which we enjoy from the comfort of our beautiful dive resort.

If you’d like to join us and experience the warm hospitality of North Sulawesi and the exceptional service of Lembeh Resort contact us for more information and to make your booking: reservations@lembehresort.com 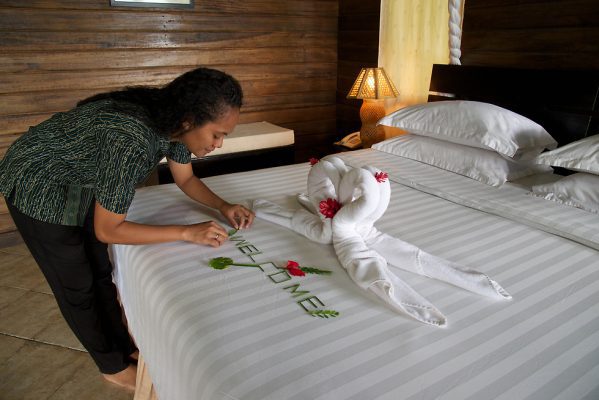