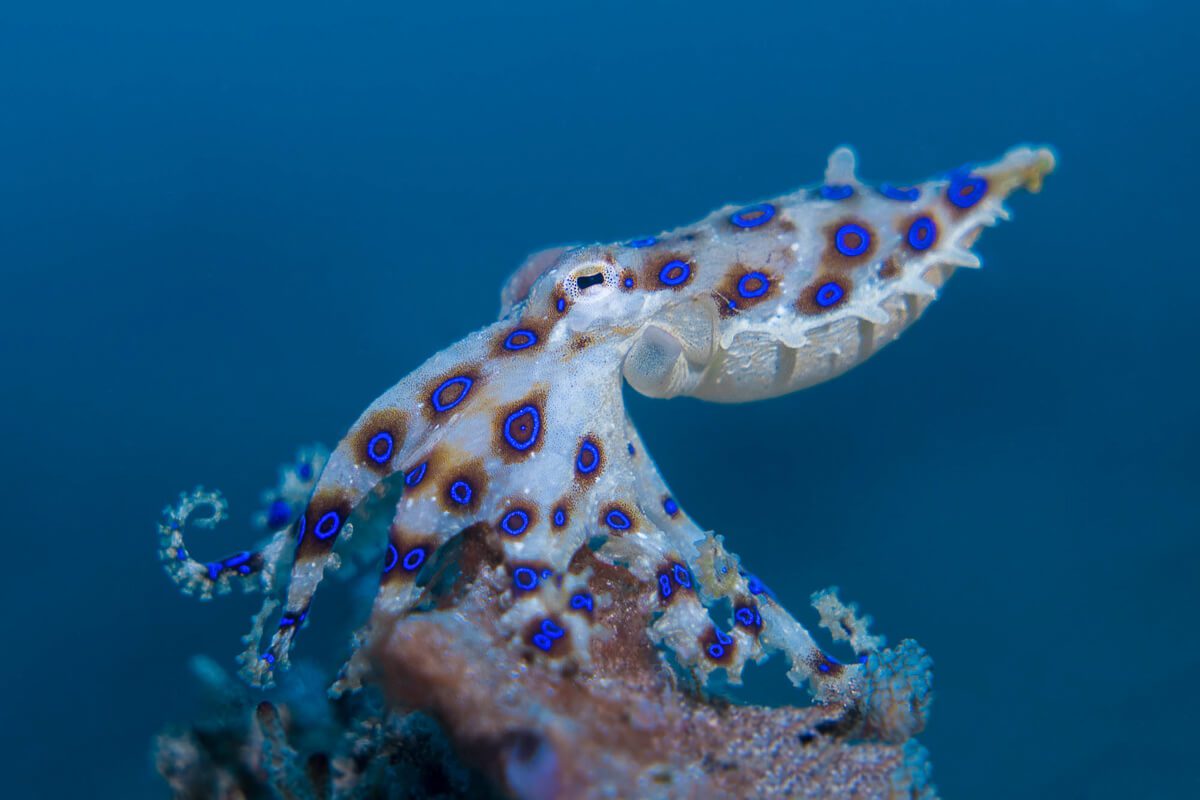 The star of this Blog is the blue ring octopus (Genus: Hapalochlaena), infamous for its deadly venomous bite and loved for its photogenic appearance and pulsating rings. In this Blog, we’ll get up close and personal, explaining the different species of blue ring octopus and taking a closer look at their habits, venomous bites and treatment, where to find them, and how to photograph them in the Lembeh Strait.

If you are interested in underwater photography or videography, you can take a closer look at our facilities and services for photographers here.

Most octopus species are solitary, only coming together to mate, and even then the male usually tries to avoid coming into too close contact with the female as she sometimes will eat the male in order to get an immediate protein boost for egg production. Blue rings are no different unless they are mating at (literally) arms reach, they are a solitary genus.

What do we mean by Genus? Genus is the blue ring family, known as Hapalochlaena.  What is surprising to many people is that there is actually more than one species of blue ring octopus within the blue ring genus. The species which is commonly referred to in fish ID books is the Hapalochlaena lunulata. 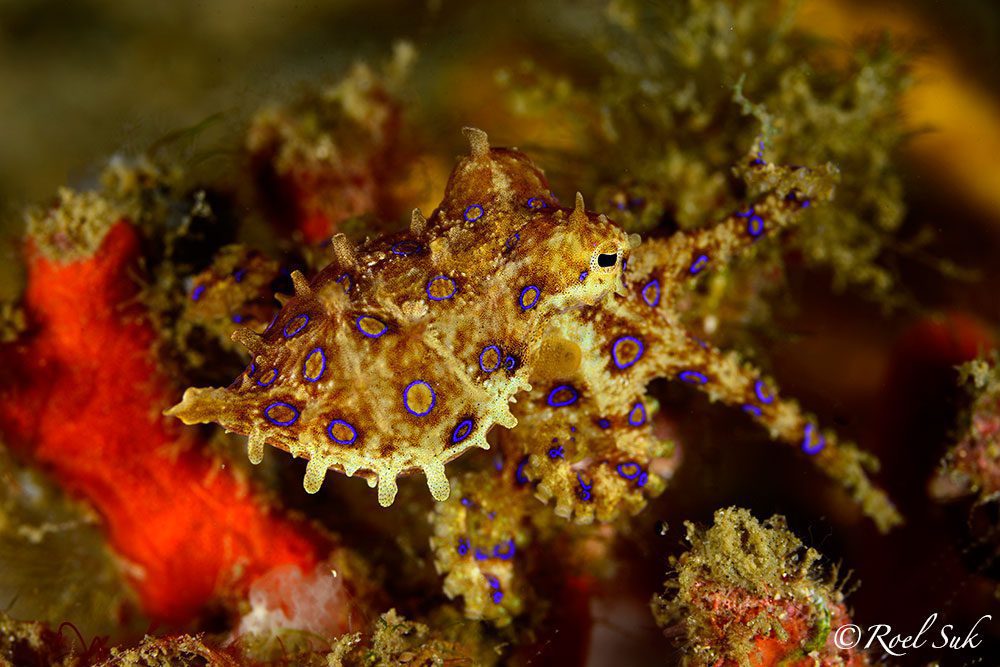 Hapalochlaena lunulata, is present in the Lembeh Strait and it lives at shallow depths on coral. It is the larger of the two species of blue ring found in Lembeh and it grows to around 5cm (in mantle length) and has bright yellow skin. 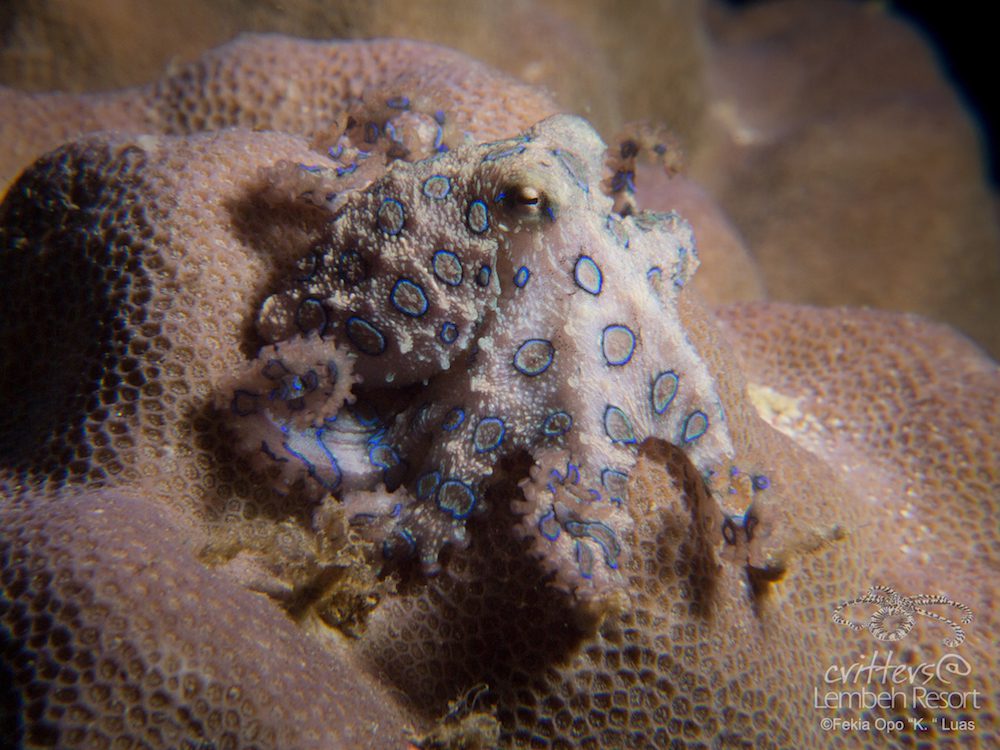 The other species of blue ring octopus that we find in Lembeh is the Hapalochlaena Sp. The “Sp.” after the genus name means that this species has yet to be described so it isn’t yet officially recognized by science – once it is, it will receive a species name on the back of its genus name to replace the Sp.  Describing a new species requires a scientific paper to be submitted that details the species’ differences from already recognized members of that same genus, this may also require the submission of specimen samples and DNA. It is this undescribed species that is actually the most common species found in Lembeh.

Hapalochlaena Sp. is smaller than the lunulata (typically 3cm mantle length), it has a more camouflaged skin color, leaning toward maroon and sandy hues, and it is typically found in coarse sand and rubble habitats at depths of about 18-25 meters.

Blue-ringed octopus in Lembeh seem to know how venomous they are and (luckily for us) they are very placid and unaggressive, even to the point of not flashing their rings even when divers are observing and photographing them. Rather than trying to startle a blue ring octopus into showing its rings, try observing without interfering and you may be rewarded by witnessing awesome natural behavior such as hunting, feeding, or even mating.

Fact: Male blue ring octopuses cannot immediately tell the sex of other blue rings so they will approach and try to mate with the nearest individual, if it turns out both are males then they quickly disengage and continue the search for a female!

Feeding: Blue ring octopus feed on small crabs, hermit crabs, and shrimp. They use their beaks to make a small hole in the crustacean’s shell into which they spit their venomous saliva to render their prey paralyzed while the blue ring feeds on them.

Like most critters in the Lembeh Strait, blue ring octopus are found at several dive sites and they move around seasonally. Dive sites in Lembeh that offer the best habitat for blue rings (and therefore consistently good chances of a sighting) include Goby-a-Crab, Critter Hunt, Pulau Abadi and Tanjung Kusu Kusu. 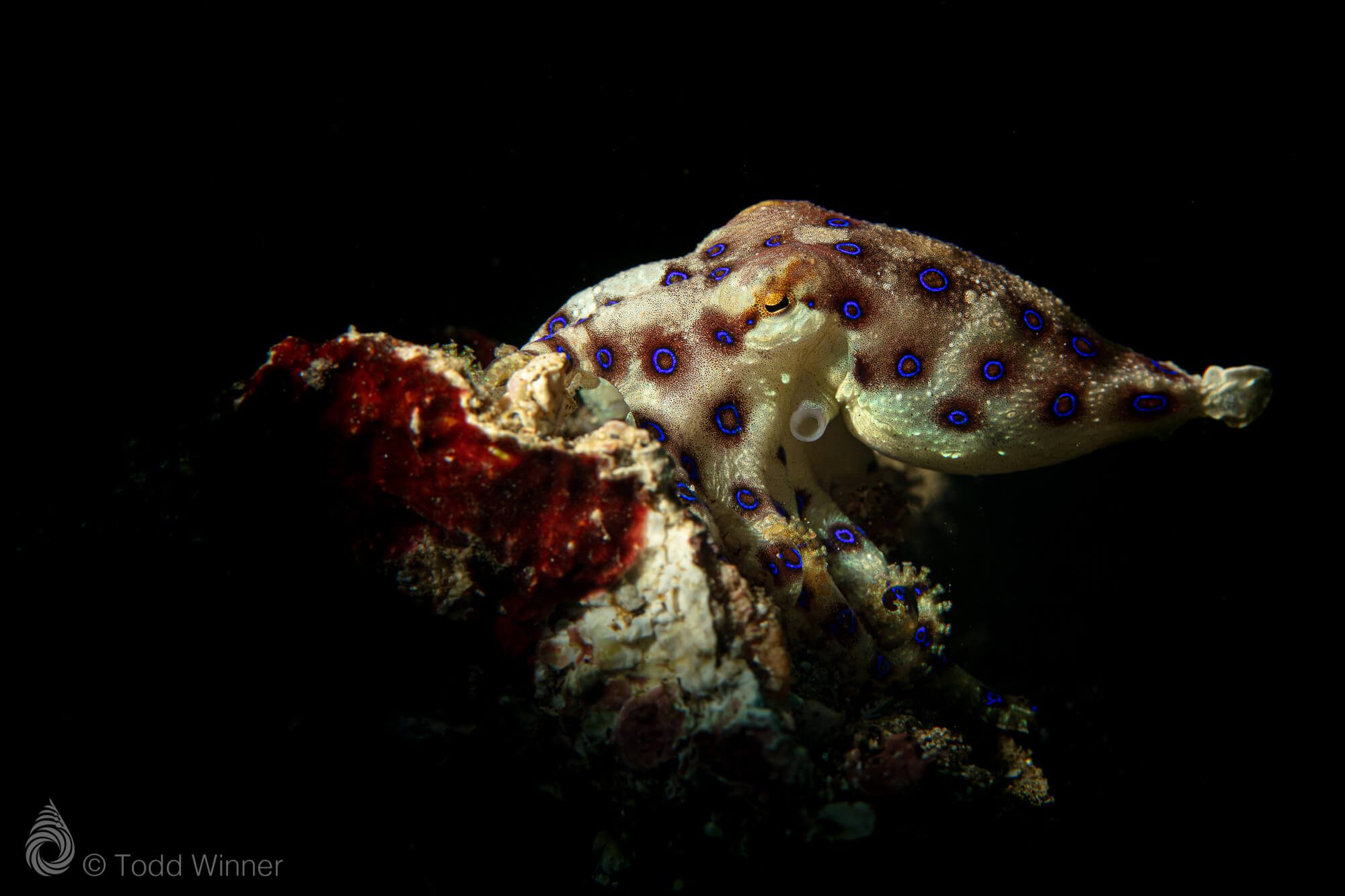 It’s often reported that blue ring octopus are extremely dangerous to humans but that is not so, few people have died from blue ring bites because they are incredibly docile unless provoked.

Blue rings do not make their own venom. They use bacteria they find in the ocean and store it in their salivary glands. The bacteria secrete a toxin called tetrodotoxin, or TTX. This is the same as the toxin found in pufferfish. It is extremely potent and does have the possibility to kill. There is also no antidote.

TTX works on humans in the same way it does on a blue ring’s crustaceous prey. It will render a human paralyzed. Some people who have been bitten by a blue ring have not known they have been bitten as the bites are extremely small – often leaving no more than a drop of blood as evidence.

Some people who have been bitten said that they were conscious and aware of what was going on but weren’t able to move. Within 5 to 10 minutes of a bite, you may start to experience:

Not all bites contain the same amount of venom. How severe your symptoms are will depend on how much toxin was transferred to you when bitten. Body mass is an important factor and children and small adults are more at risk.

If you are bitten by a blue-ringed octopus, seek medical help immediately. If you are with someone who is bitten, you should:

What Is the Prognosis for a Blue Ring Octopus Bite?

People who seek prompt treatment and follow the guidelines above will usually completely recover from a blue ring octopus bite. They may need help breathing until the effects of the venom wear off but because the venom doesn’t affect the heart or brain, as long as a person keeps breathing, there usually aren’t any long-term problems.‌

There have only been 3 known deaths from blue ring octopus bites and many more people have been bitten and survived without complications. 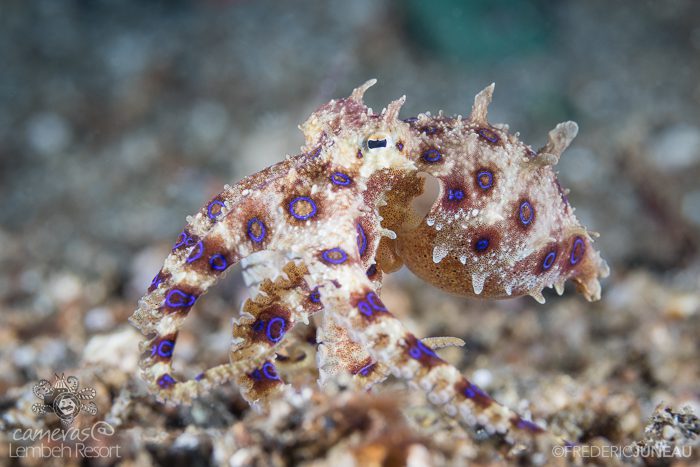 When taking pictures of blue ring octopus, it’s important to get close to get a clear shot and reduce backscatter. Approach slowly and steadily so as not to startle the critter and avoid prolonged use of lights in the blue ring’s eyes. If the blue rings begin to show and flash then take that as a warning and back your camera rig away. Never deliberately try to agitate the creature to show its blue rings – this is incredibly stressful to the critter. You can be rewarded by seeing the blue ring in other ways – by waiting quietly until another ‘natural’ event triggers the flashing.

We look forward to diving with you soon in the Lembeh Strait! To make a reservation or for more information, contact us on: [email protected]