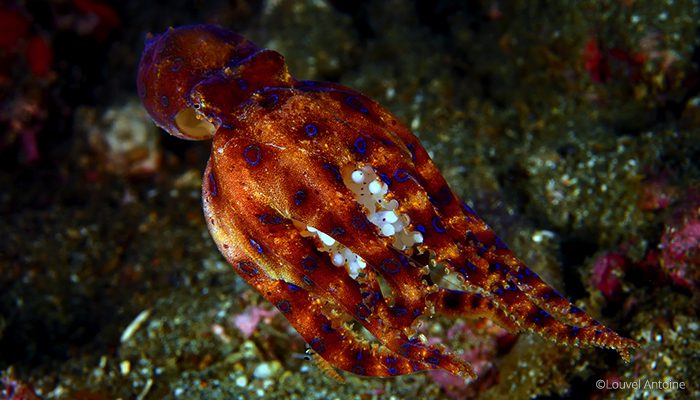 Octopus – for divers, it’s hard to imagine a more mysterious and fascinating animal. Their intelligence is legendary, they can change colour instantly, squeeze into tiny spaces, escape from tanks like Houdini, are venomous (and sometimes deadly to humans), they are the only invertebrate known to use tools and they are found at all depths, from tiny tide pools to 4000+ meters deep. Their adult size ranges from just a centimeter or two as with Bock’s pygmy octopus (Octopus bocki), to the Giant Pacific octopus (Enteroctopus dofleini) at 5 meters long or more, and most divers are shocked at its tiny size when they see their first blue-ringed octopus while diving in Lembeh Strait. 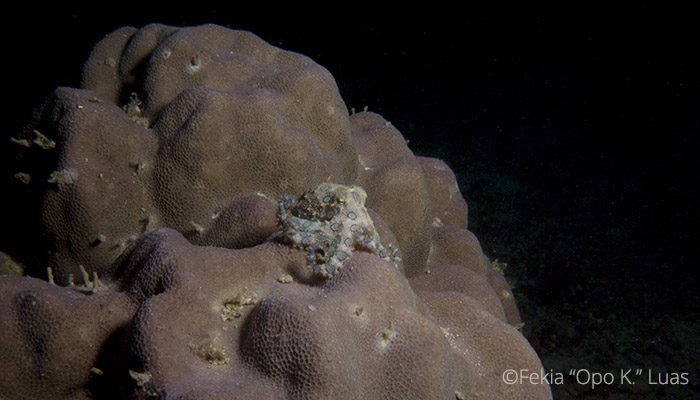 Most octopus species are solitary, only coming together to mate, and even then the male usually tries to avoid coming into too close contact with the female as she sometimes will eat the male in order to get an immediate protein boost for egg production. 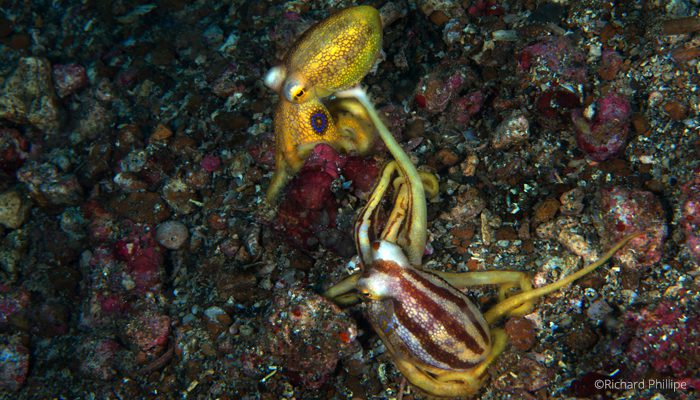 Typically smaller octopuses (not octopi!) have short lifespans of about a year or two although larger species such as the Giant Pacific can live up to 4 or 5 years, and with most species, males die shortly after mating and females pass away after their eggs hatch. 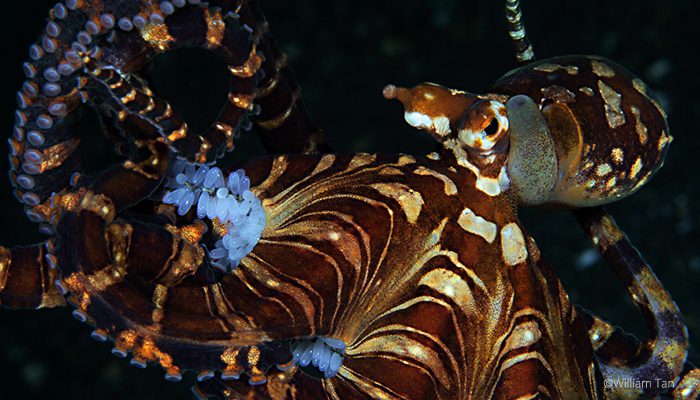 They feed on crustaceans such as crabs and shrimps but also eat some types of fish, and the Giant Pacific octopus has been filmed capturing and killing sharks and even seagulls.

Let’s look at a few Lembeh species and what makes them unique.

The coconut octopus (Amphioctopus marginatus) is a favourite among divers because of its interesting behaviour and inquisitive nature. Considered to be the only invertebrate which uses tools, these canny critters pick up discarded clam or coconut shells and bury 2 or 3 of them into the sand until they are level with the sand surface and then hide between the shells for protection. Very curious and often unafraid, these fascinating animals will often readily accept additional shells offered by divers and occasionally pick up their home and awkwardly walk away with multiple shells in tow. 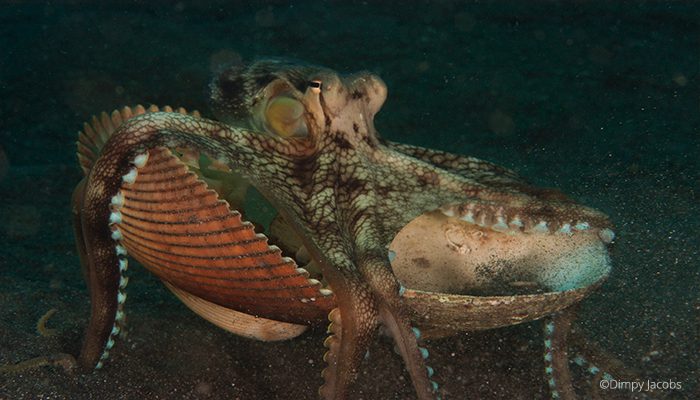 Coconut octopus making a getaway with its treasure

When resting, they are camouflaged to match the sand they live in and feature a fine, vein-like pattern but when agitated they turn dark brown and their suckers take on a glowing blue tinge.

We occasionally see yellow pygmy gobies (Lubricogobius exiguus) living together with coconut octopuses but do not know whether they merely tolerate each other or have a symbiotic relationship. Coconut octopuses prefer a flat sandy habitat and have been found in water just 10cm deep to depths of 20+ meters but seem to prefer shallow sand areas between 3-6 meters. 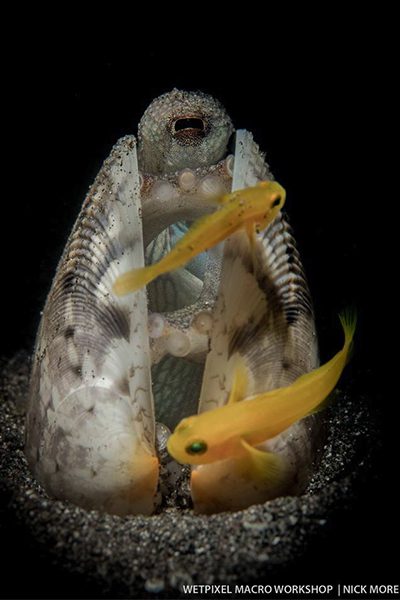 Blue-ringed octopuses are some of Lembeh’s flashiest and most photogenic critters. There are 2 species in Lembeh, both tiny: Hapalochlaena lunulata, which is very infrequently found and lives at shallow depths on coral, is the larger of the two at around 5cm mantle length, and has bright yellow skin. 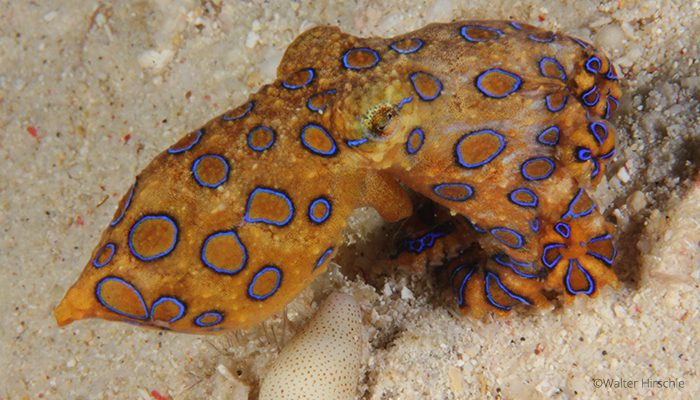 The other species, Hapalochlaena sp., is undescribed**, and is smaller (typically 3cm mantle length), has a more camouflaged skin colour tending to maroon and sandy hues, is seen much more frequently than H. lulunata and is typically found in coarse sand and rubble habitats at depths of about 18-25 meters. 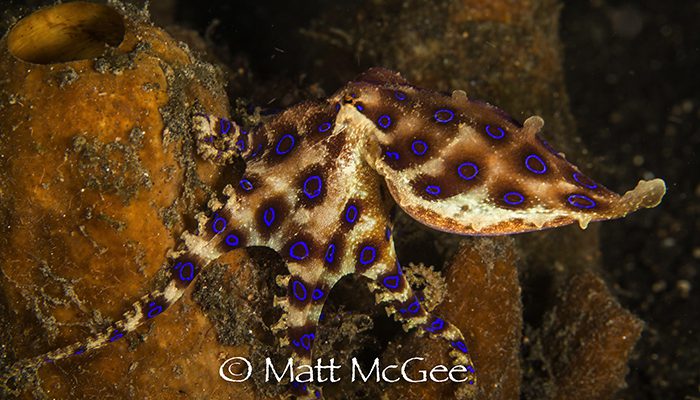 Blue-ringed octopuses in Lembeh seem to know how venomous they are and are (luckily for us) very placid and unaggressive, even to the point of not flashing their rings despite the attentions of fascinated divers surrounding them. Rather than trying to startle the blue-ring into showing its rings, try observing without interfering and you may be rewarded by witnessing awesome natural behaviour such as hunting, feeding or even mating. Fact: male blue-ringed octopuses cannot immediately tell the sex of other blue-rings so they will approach and try to mate with the nearest individual, if it turns out both are males then they quickly disengage and continue the search for a female! * 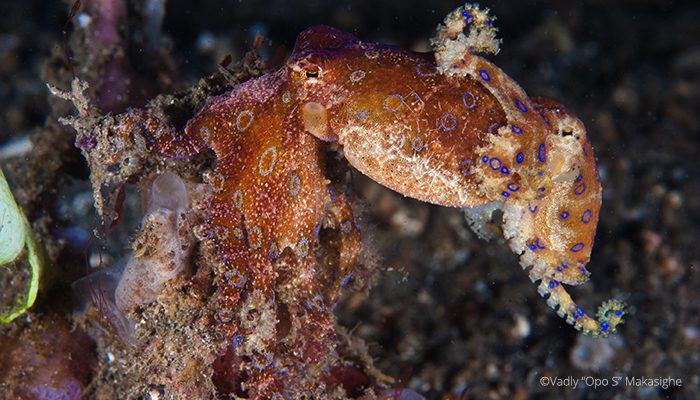 Mating Hapalochlaena sp blue-ringed octopuses. Notice the smaller male is behind the female, in order to avoid being eaten

The legendary mimic octopus (Thaumoctopus mimicus) is strikingly black-and-white patterned when agitated but perfectly camouflaged and sand-coloured when relaxed and is about 30cm long. 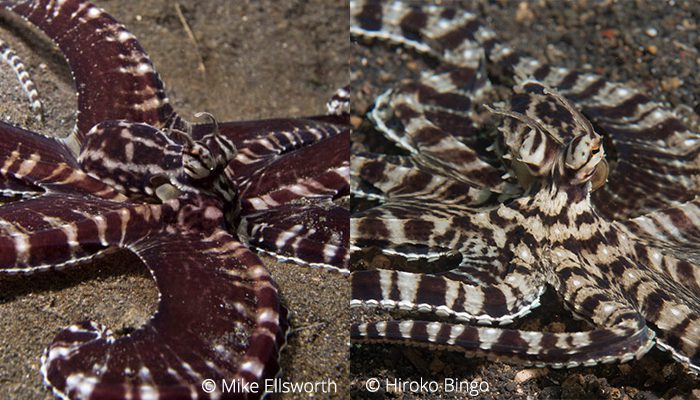 Some claim that this octopus mimics other animals to avoid predators while others say we misinterpret its behaviour and that it does not engage in mimicry. Mimicry or not, seeing this octopus is a rare thrill and it makes for a beautiful photo subject when it fans out its arms and accentuates its stripes. It lives exclusively in a fine black sand (muck) habitat where it can easily burrow down for protection from predators. Intriguingly, there is a species of jawfish (Stalix histrio) which has possibly evolved to blend in exactly with the pattern on mimic octopuses, and if you are very lucky, you may see this jawfish swimming alongside the mimic. Again, the relationship between these animals is not understood. 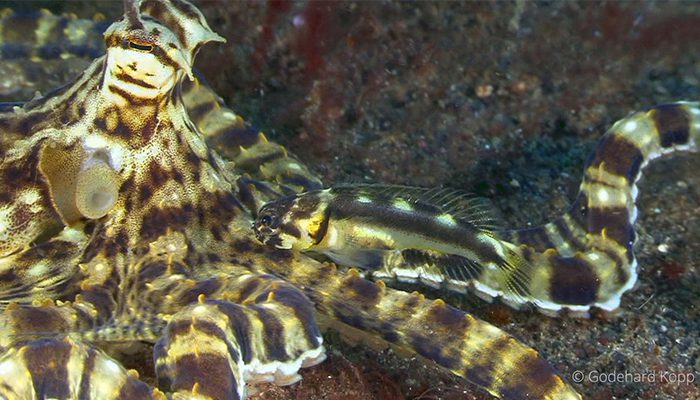 Final word of advice for divers in Lembeh wishing to observe and photograph or video octopuses – keep an eye out for other critters nearby such as flounders, scorpion fishes, or snake eels. Many sea creatures love to eat octopus and the boneless, shell-less body is easily slurped up like a strand of spaghetti so lest your rare photographic subject become a meal, shoo away that flounder coming too close. What happens while we aren’t there is nature taking its course but while we distract an octopus with our presence we have a responsibility to protect it from predators. 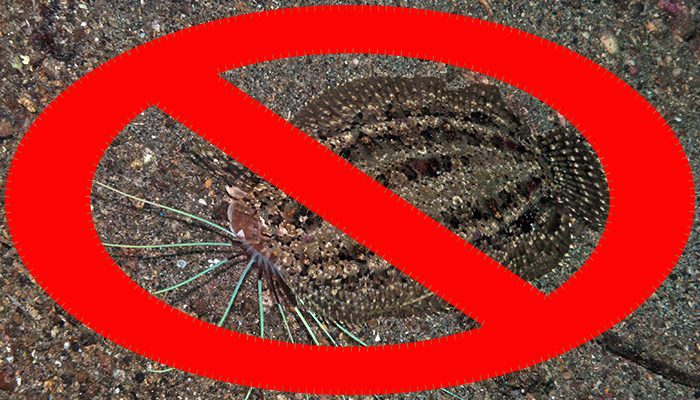 Do you love octopus too? Check out our Tentacle Festival, hosted by Bret Grasse.

Thank you very much to our guests for allowing us to use their images in this article.