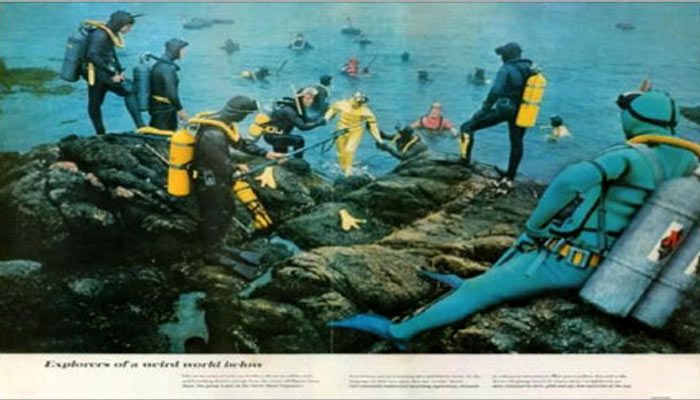 Diving: a ‘Totem of Hedonism, Exhilaration and Exoticism’?

Can you imagine diving 57 years ago or more?! In one respect, I’d have loved to have had the opportunity, when the reefs were healthier and the marine life was plentiful. But I sure wouldn’t give up the conveniences of today’s underwater equipment, boy has it come a long way since then, technology is king! I can’t even imagine diving in a “custom made” suits  like the ones shown above, every time I suit up, I hear “pulling this is on the worst part of diving”.
Cover Photo: 1959 North Shore Frogmen “suit up” to model for Life Magazine

How long has your dive club been around? Members of the North Shore Frogmen dive club, located outside Boston in Rockport, Massachusetts, recently stayed and dived with Lembeh Resort & [email protected] Resort. Mike & Ellen Garvey are life members of the oldest incorporated dive club in North America and I when they mentioned a story in about Scuba diving in Life Magazine back in 1959 that featuring their club I found it fascinating.

Thanks to the internet I was able to find this photo shoot and article that brought their club into the spotlight back in 1959. Life Magazine did as a special issue on The Good Life (Dec 28, 1959 Life Magazine)[i]. Life enthused: “a million skin and scuba divers will plunge into US waters, there – weightless in an alien element – to drift, glide and pry into the mysteries of the sea” [i]. Is this figure right, in 1959? Strangely enough, Undercurrent’s article in 2007 states, “if you define active as taking five or more dives a year, which seems reasonable, we think 1.2 million, plus or minus 15 percent, might hit it pretty close”. But I guess “plunge and active” are two different things, because based on their figure it hasn’t increased very much?

“…diving was celebrated as a totem of hedonism, exhilaration and exoticism”[ii]. For me it still is, don’t you still feel that special rush and feeling of being in some exotic underwater environment? Especially diving in Lembeh Strait, where the marine life and unusual critters sometimes look like something from out of this world.

“Numerous Hollywood movies and TV shows featured scuba diving as a spectacle of alluring adventure”[ii]. Who didn’t want to be cast into the show Sea Hunt, how cool would it be to have one of those dive suits they used in the show? So slick! Imagine having the opportunity to be an explorer of the world’s oceans like Jacques Cousteau!

To paraphrase (Bell & Hollows, 2006 pg. 89), “… Dripping with exhilarating and glamorously sexy connotations, the 60’s scuba phenomenon… who embraced scuba diving as one of their pre-eminent lifestyle sports”. Exhilarating, definitely. But really, do we look sexy after a dive with our hair plastered to our head and the only thing that’s “dripping” is water and mucus. I sure don’t feel sexy, do you? 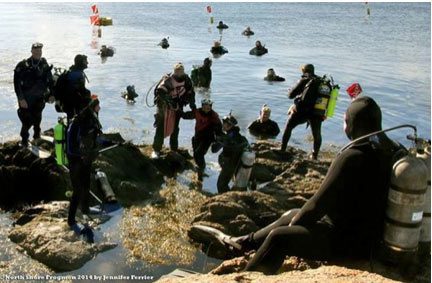 Let’s fast forward to 2015, the Frogmen are still around, with 105 members, 27 of which are “life members”. If you look closely at the original photo above, you’ll see Art Chanel, one of the original Frogmen, shown above in a pink rubber suit. Notice Art in the same position in the reenactment; “once a diver, always a diver”, could be a proper use of the term here.

Our reefs and the marine life in our oceans have sadly decreased since then, but can you imagine what you would have seen back in 1959 or what images your high tech digital underwater camera could have captured back then? It’s mind blowing! 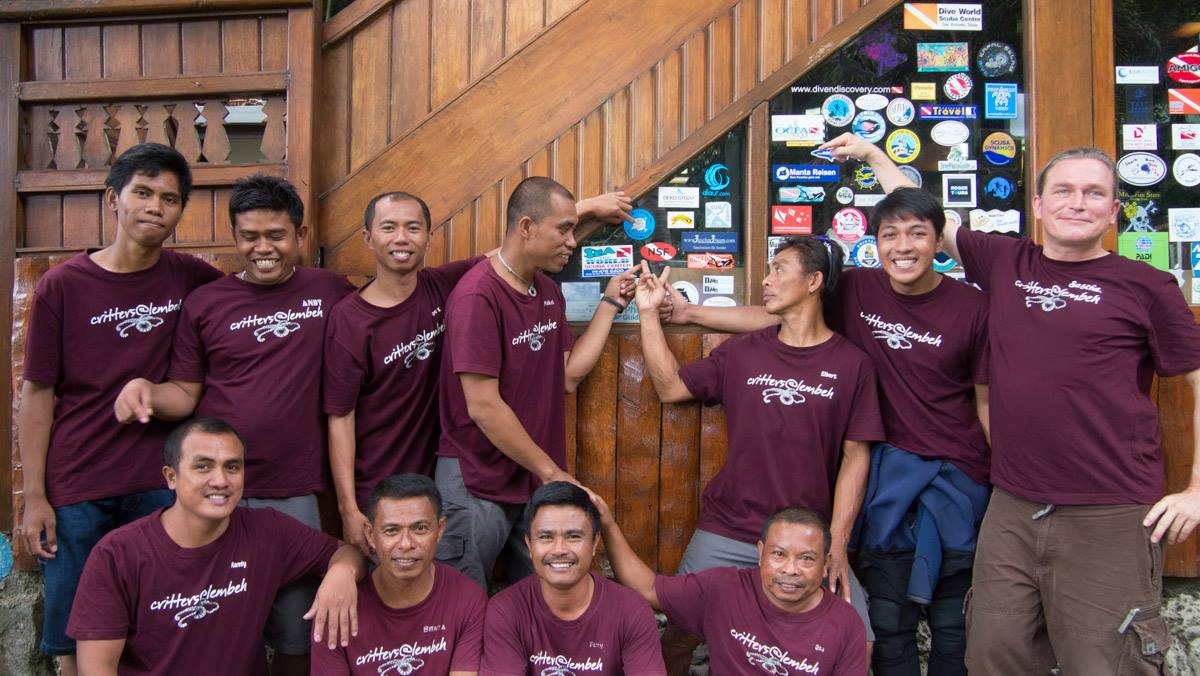 Mike & Ellen are now huge fans of “muck diving”. Hopefully, with their photos and presentation to the club, more of their club members will become interested in daily treasure hunts for the weird and unusual critters that call Lembeh Strait home. It was a pleasure diving with you both. Here’s to another 57+ years for the North Shore Frogmen, Cheers!

Do you belong to a dive club that has made history? Tell us about it.

[i] For more information on The Good Life, read Life Magazines full article in the Dec 28, 1959 issue. If you enjoy 50’s style American kitsch, you’ll get a kick out of these vintage editions of Life Magazine. I think you’ll agree some of the photos are fantastic and some of the ads are comical.

Below is some of Ellen Garvey’s images from their recent trip.