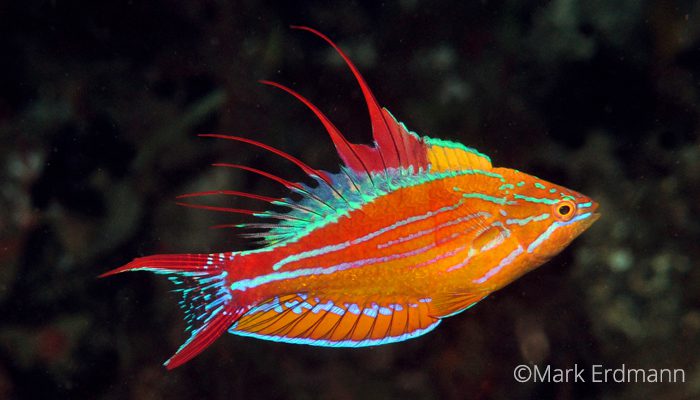 The Flashers of Lembeh

It’s generally the case that most things we humans do or build have already been done (usually better!) by Mother Nature. So it should perhaps come as no surprise that even the human behavior of “flashing” (envision naked men in overcoats) was in fact long ago invented by an otherwise nondescript little genus of fishes – the flasherwrasses! These small (4-7cm) wrasses would generally be overlooked by divers as just another “little brown job” on the reef, but come late afternoon, males rise up into the water column and suddenly “flash” to the harem of surrounding females – turning on brilliant colour patterns and splaying out their ornate fins in a display that would put any peacock to shame. Capturing a male flasher wrasse in full nuptial colouration is one of the more challenging tasks an underwater photographer can undertake, but the satisfaction of catching this ephemeral firework show in focus is well worth it! 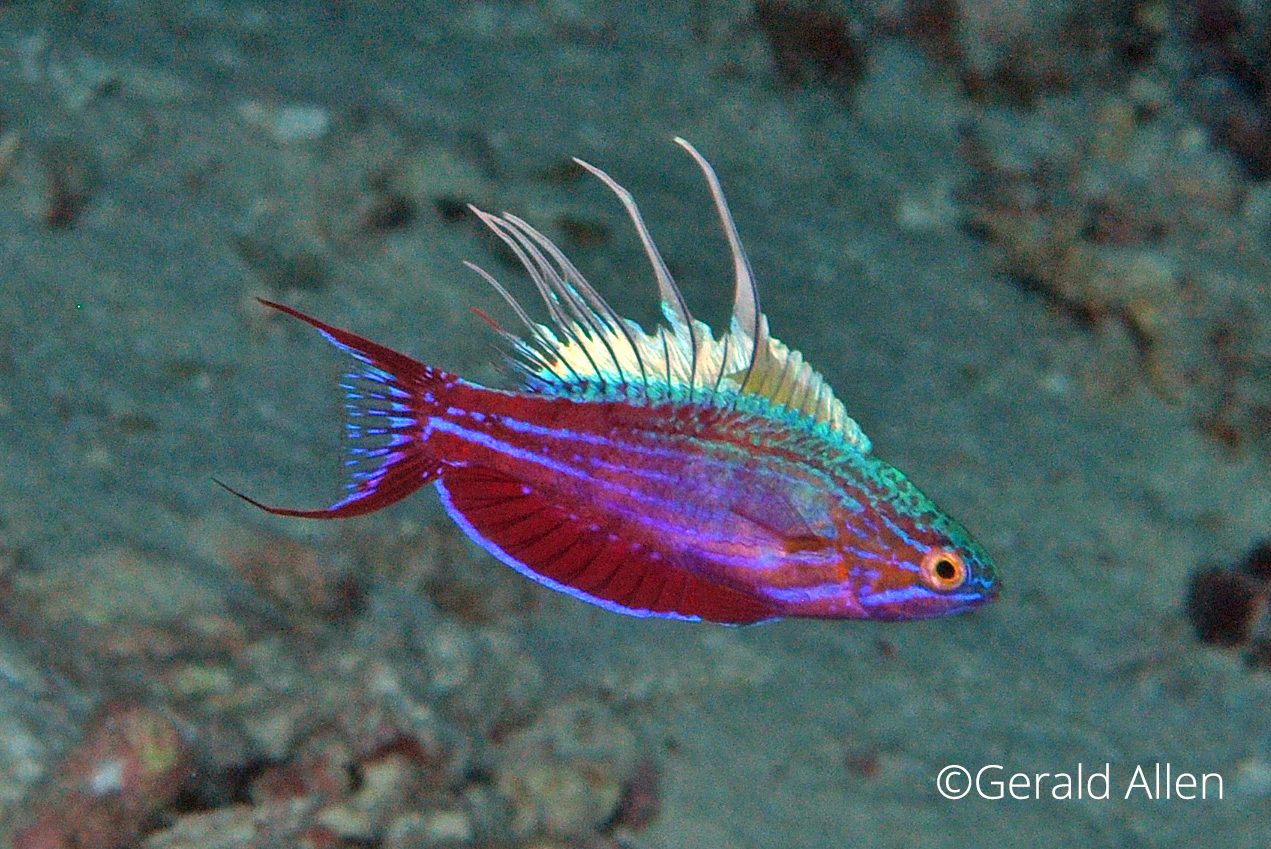 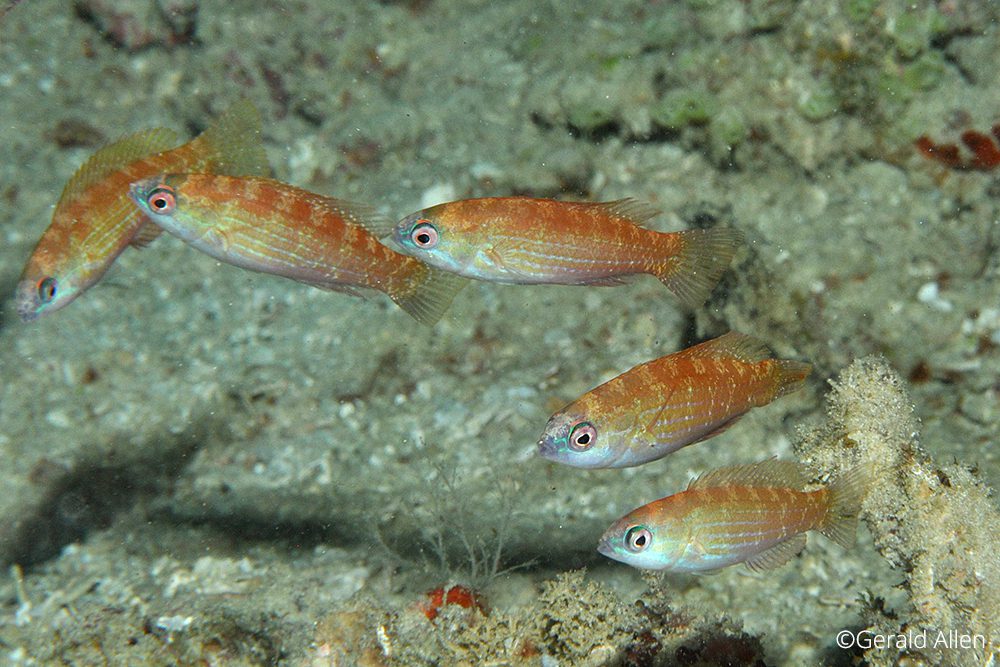 P. cyaneus females. Males have a similar drab colouration when not actively flashing.

Flasherwrasses (genus Paracheilinus) were only discovered in the mid 1970’s when fish scientists began actively using scuba, and since that time a grand total of 20 different species have been described – 13 of which are found in the Coral Triangle (my colleague Gerry Allen and I recently reviewed the genus and described 3 new species from Indonesia). Visitors to Lembeh have the opportunity to see four different species: Paracheilinus cyaneus, P. togeanensis, P. carpenteri, and the newly described P. paineorum. Interestingly, because these species frequently co-occur in mixed species schools and all spawn at the same time, hybridization is a common occurrence – and Lembeh in particular has a high percentage of hybrids. This is only readily seen in the males, as the females of pretty much all flasherwrasses look the same (which is also partly responsible for the rampant hybridization!). 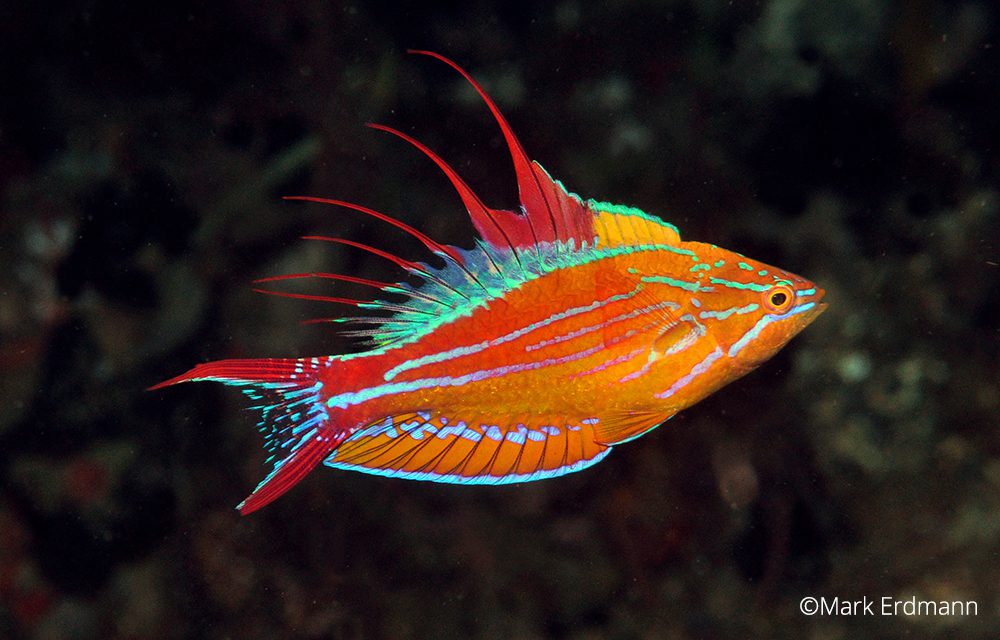 P. paineorum was only described earlier this year and is common in Lembeh Strait. 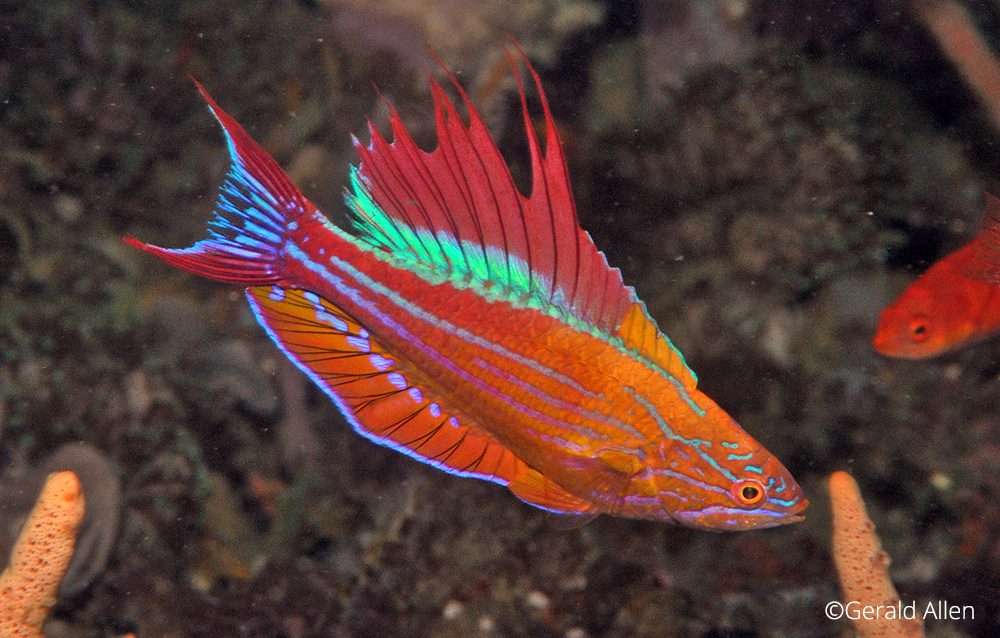 Its quite easy to observe flasherwrasses in full nuptial display, but it does require a bit of a trained eye and it is important to visit the right habitats at the right time of day. In general, flashers are most active at early dusk (4:30-5:30pm), though on an overcast day you may find them doing their thing in the middle of the day. They prefer a mild to strong current, and usually can be found displaying at depths of 15-50m in rubble fields or Halimeda algae beds (habitats which are quite common in Lembeh but where divers rarely go, as they are otherwise drab environments). The northernmost section of Nudi Falls is one of the best areas to observe flashers in Lembeh, but there are many other sites – look for relatively flat, current-swept plains – not sand/muck, and not coral reef – but rubble fields or algae and low-growing coral colonies where the fish can gain shelter in a pinch. 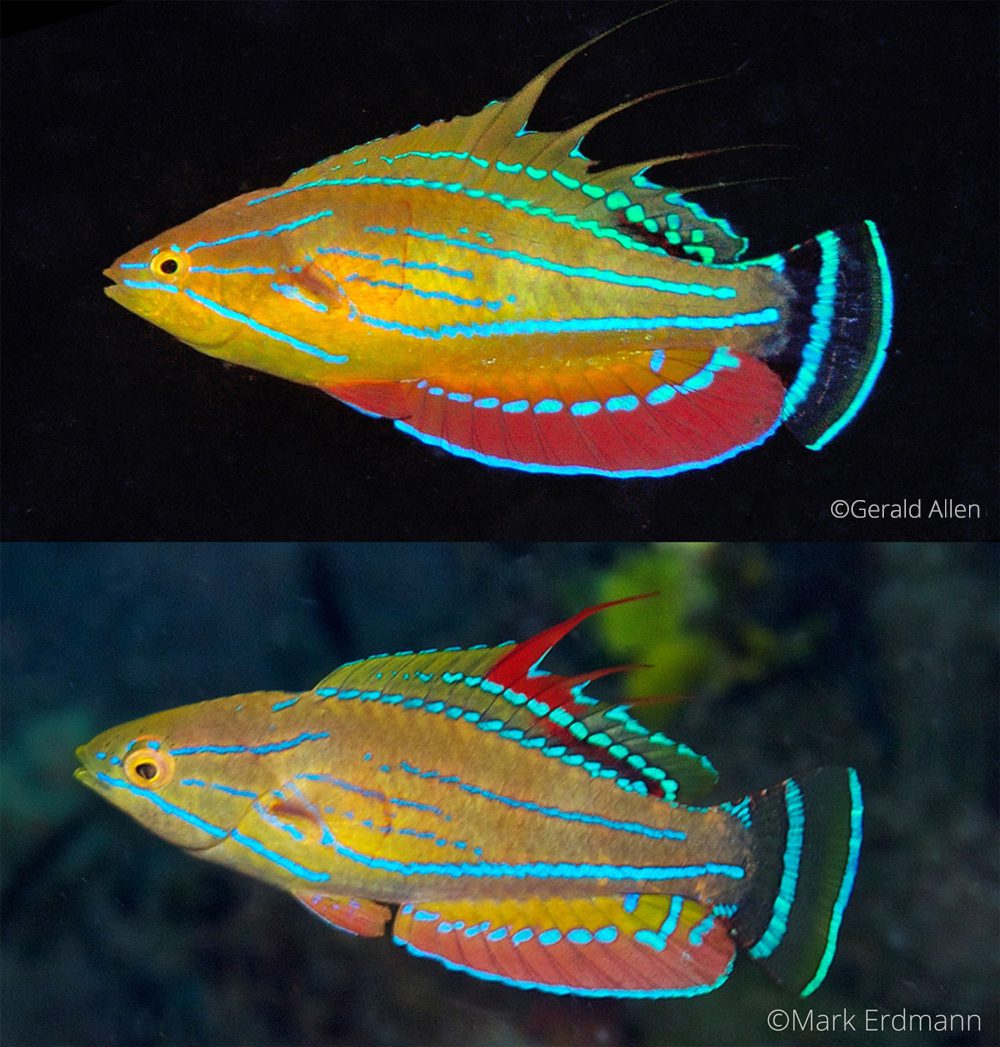 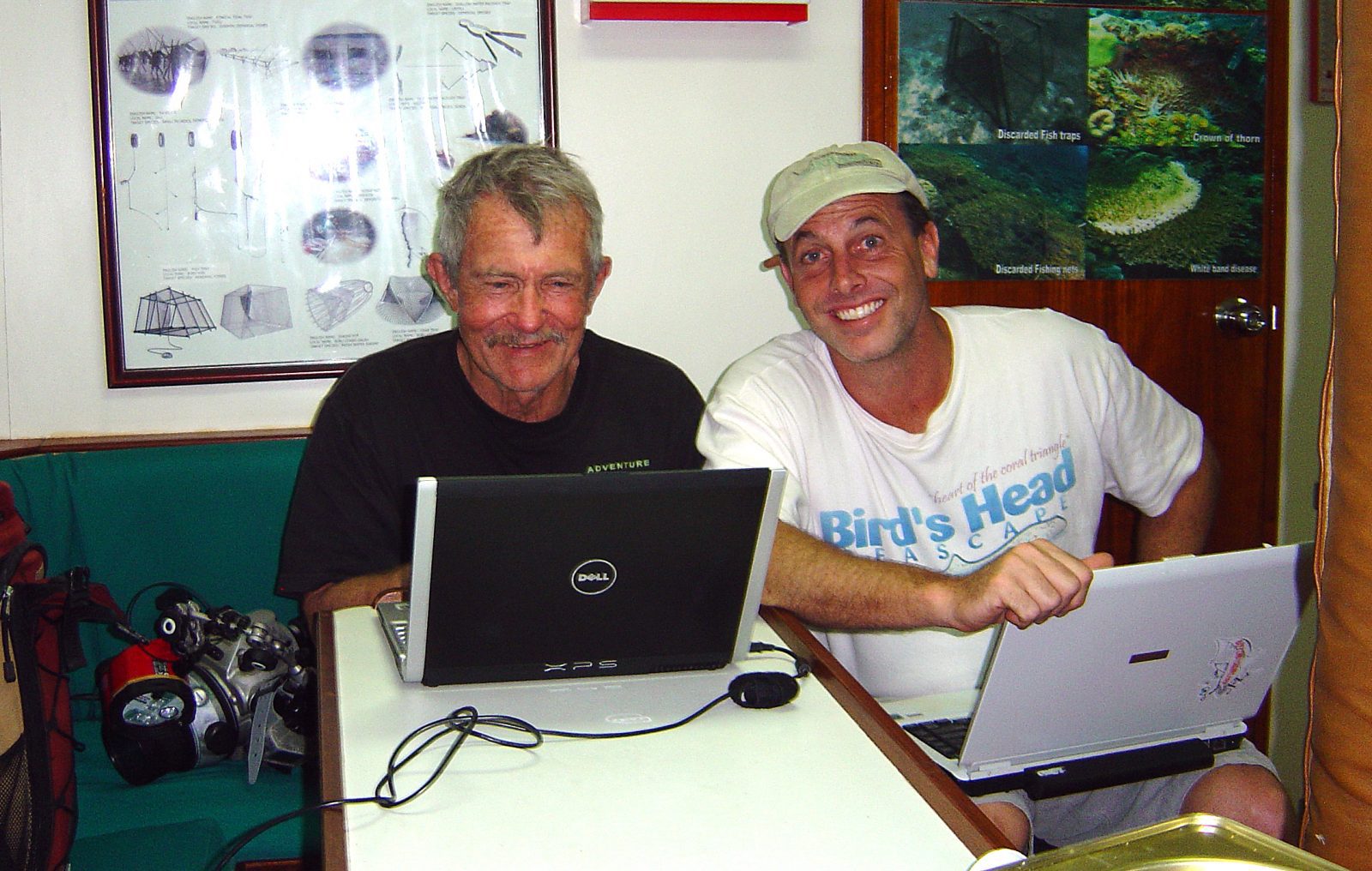 Next time you’re in Lembeh, have a go at a late afternoon flasher dive – and challenge yourself to see how many species (and hybrids!) you can capture (in focus!) strutting their stuff….

Mark Erdmann is Vice President of Asia-Pacific Marine Programs for Conservation International and is now based in New Zealand after 23 years of living in Indonesia. A mantis shrimp expert by training, for the past 12 years he’s worked closely with Dr. Gerry Allen to explore and describe the reef fish biodiversity of the region, culminating in the recent 3-volume book (and tablet app) series, Reef Fishes of the East Indies. Check out also his 1101 fishes article.

Mark will be visiting Critters@Lembeh Resort from 14-21 July 2016 and giving informal presentations on Lembeh’s fish diversity (including the flasherwrasses!).